In chapter 44, the LORD introduced us to a guy not even born yet, something no idol could ever do.

In chapter 45, He continues this amazing prophecy, speaking directly to the not-yet-born Cyrus:

“Thus says the Lord to His anointed,
To Cyrus, whose right hand I have held—
To subdue nations before him
And loose the armor of kings,
To open before him the double doors,
So that the gates will not be shut:
‘I will go before you,
And make the crooked places straight;
I will break in pieces the gates of bronze
And cut the bars of iron.
I will give you the treasures of darkness
And hidden riches of secret places,

(Isaiah is prophesying about a Gentile, who doesn’t even know the LORD! What is God’s purpose?  Let's look and see...)

That you may know that I, the LORD,
Who call you by your name,
Am the God of Israel.
For Jacob My servant’s sake,
And Israel My elect,

“Rain down, you heavens, from above,
And let the skies pour down righteousness;
Let the earth open, let them bring forth salvation,
And let righteousness spring up together.
I, the LORD, have created it.

This whole speech to a man yet unborn, one who is a future and powerful Gentile king, leaves me rather speechless.  Why is the LORD doing all this?  So that Cyrus will know Him!  And so that all of us, when we read these writings thousands of years later, can also know Him!

If there remains any doubt that YHVH is absolutely sovereign and in charge of everything, the prophecy continues with a warning.

“Woe to him who strives with his Maker!
Let the potsherd strive with the potsherds of the earth!
(A pot among the other pots of the earth)
Shall the clay say to him who forms it, ‘What are you making?’
Or shall your handiwork say, ‘He has no hands’? 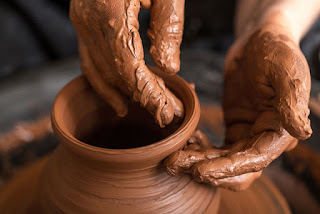 How often do we do this? Compare ourselves with others? Question why we are who God made us to be? Yes, I do this. So far, I've only done it twice today, but it's still early in the day. Scripture uses the analogy of potter and clay numerous times. Paul reiterates the sovereignty of the LORD in Romans 9:21...

Does not the potter have power over the clay, from the same lump to make one vessel for honor and another for dishonor?

Yes, God is in complete charge.  Will we yield to Him, or will we become a mis-shapen pot?  The warning continues:

Woe to him who says to his father, ‘What are you begetting?’
Or to the woman, ‘What have you brought forth?’”
Thus says the Lord, The Holy One of Israel, and his Maker:
“Ask Me of things to come concerning My sons;
And concerning the work of My hands, you command Me.
I have made the earth, And created man on it.
I—My hands—stretched out the heavens, And all their host I have commanded.

(Several times in Isaiah we have heard that God has stretched out the heavens. This seems to answer the scientific question of how the light from the stars reaches earth without needing billions of light years... by the hand of God who stretched them out. Maybe the earth IS the center of everything He created.) 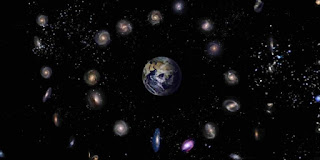 Now the LORD gets really specific regarding the future actions of Cyrus:

I have raised him up in righteousness,
And I will direct all his ways;
He shall build My city,
And let My exiles go free,
Not for price nor reward,” Says the LORD of hosts.
(hosts:  tsavaot – the Hebrew word for armies)
The LORD, the Only Savior

In case you don't know the story, the Jews who had been exiled in Babylon for 70 years were given permission by Cyrus, king of Persia, to return to Jerusalem and rebuilt the temple. Here is his decree in 2 Chronicles 36:23:

Thus says Cyrus king of Persia: All the kingdoms of the earth the LORD God of heaven has given me. And He has commanded me to build Him a house at Jerusalem which is in Judah. Who is among you of all His people? May the LORD his God be with him, and let him go up!

And indeed, Jews then returned to Jerusalem with joy and eventually rebuilt the temple.


The chapter goes on to describe the sovereignty of the LORD and the futility of idols (in case we haven't taken these things to heart yet).  Here are several highlights from the remaining verses:

But Israel shall be saved by the LORD
With an everlasting salvation;
You shall not be ashamed or disgraced
Forever and ever.

For thus says the LORD,
Who created the heavens, Who is God,
Who formed the earth and made it,
Who has established it,
Who did not create it in vain,
Who formed it to be inhabited:

(A quick side note:  the LORD created this earth for man.  His purpose has always been to dwell here with us.  Someday, He will return to EARTH, renew it, and reign with us from HERE and not some cloud in the sky.)

“I am the LORD, and there is no other.
I have not spoken in secret, In a dark place of the earth;
I did not say to the seed of Jacob, ‘Seek Me in vain’;
I, the Lord, speak righteousness, I declare things that are right....
“Look to Me, and be saved, All you ends of the earth!
(Not just Israel, but those who attach themselves to the Holy One of Israel)

For I am God, and there is no other.
I have sworn by Myself;
The word has gone out of My mouth in righteousness,
And shall not return,
That to Me every knee shall bow,
Every tongue shall take an oath.

Paul quotes this last part in both Romans 14:11 and Phillippians 2:10, which link this prophecy to Yeshua our Messiah, confirming that He is YHVH in the flesh.  Someday, every human that ever lived will face Him in person.  Are you ready?

If you are in Him, you are grafted into the commonwealth of Israel; like Ruth, who attached herself to the people of Israel and Israel’s God. “Your people will be my people, AND your God will be my God.”

I know... I mention Ruth often.  By attaching herself to Israel, she was blessed to become King David’s great grandmother, and ultimately in the lineage of the Messiah! What an honor. Are you a friend of God’s chosen people? In attaching to the God of the universe, do you also attach yourself to them?

Posted by Gratefully Grafted In at 8:39 AM