Picking up with verse 10, we are in a last days context.
Behold, the LORD God shall come with a strong hand,
And His arm shall rule for Him;
Behold, His reward is with Him,
And His work before Him.

Who is this Ruling Arm?  It is the Messiah, Yeshua, who isn't merely seated at the right hand of God, He is the arm of God.  There is but one throne in heaven.

God is One, but He manifests in different contexts.  The Hebrew word for one is echad- which means a plurality within a unity.  For example, a basket of fruit is a singular basket of fruit but contains many fruits.

God is spirit. Yeshua the Messiah is the physical manifestation of God Himself.  One of my favorite preachers uses the expression, "God Loves and Yeshua Does."  He is the action part of God.

And the Holy Spirit is the very breath, power, and presence of God. The Hebrew word for spirit,  ruach, means breath or wind. As believers, we get to have that very breath and power of God's spirit dwelling in us!


Verse 10 also tells us that His reward is with Him. What or who is His reward? We, the people of the nations, are His reward, His inheritance. We often think of our own rewards that we earn while on earth and that will be coming to us in the kingdom, but do we stop to consider the LORD’S reward?
Verse 11 wraps up with a picture of a loving Shepherd who cares for His flock.

He will feed His flock like a shepherd;
He will gather the lambs with His arm,
And carry them in His bosom,
And gently lead those who are with young. 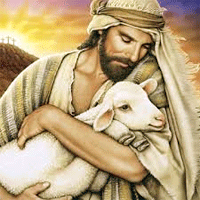 This can be compared to John 10 - the Messiah, our Good Shepherd.  This tender loving care is a reversal for Jerusalem, over whom Yeshua wept in Matthew 23:37.

“O Jerusalem, Jerusalem, the one who kills the prophets and stones those who are sent to her! How often I wanted to gather your children together, as a hen gathers her chicks under her wings, but you were not willing!  See! Your house is left to you desolate;  for I say to you, you shall see Me no more till you say, ‘Blessed is He who comes in the name of the Lord!’ ”

Even though desolation did follow in 70 AD, there remained a promise that someday Israel would say, "Baruch haba b'shem Adonai... " blessed is He who comes in the name of the LORD!

Interestingly, this Hebrew phrase is still used to describe the arrival of a Jewish bridegroom...

Isaiah goes on in chapter 40 to describe aspects of God’s greatness… the glory, majesty, and sovereignty of YHVH.

Verses 12-14 are filled with rhetorical questions, and of course, the answer is NO ONE!


Verses 15-17 go on to describe the smallness of the nations compared to God.  He is sovereign over them all.  amous for cedars.  Burning them all would not be a sufficient offering for our God.

And then verses 18-20 give us a comparison of idols to the Holy God.  Man has a tendency to create a likeness/idol, and then try to put God in a box or somehow capture His greatness.

Also, a bold prophecy is about to unfold in an upcoming chapter of Isaiah, and idols cannot predict the future the way our God can.  He knows the beginning from the end.

Verses 21-26 provide a vivid description of God’s greatness and sovereignty.  This can be compared to Job 38, which itself is filled with rhetorical questions (and is actually a biblical science exam).
Have you not known? Have you not heard?

Verse 22 mentions the sphere of the earth,  Isaiah knew the earth was round even back then.  (Maybe if people had read their bibles, would have been discovered sooner?)

In verses 24-26, Isaiah also reiterates the idea that mankind is like grass, followed by the absolute majesty of God.  What a contrast.

I am reminded of this riddle:  What is greater than God, more evil than Satan, rich people want it, poor people have it, and if you eat it, you’ll die?

The answer, of course, is NOTHING.

God’s ways toward them.  Why was He not standing up for them?  What follows is an emphasis on God’s goodness and provision.

Both names, Jacob and used here, and refer to the same person.  His name was changed when Jacob made Elohim his God.  Jacob went through a time of wrestling with the LORD, and then when his name was changed to  he was promised the covenant blessing.  means both struggles with God and Prince of God.  Jacob wrestled with the LORD all night before he received the blessing, the name change, and the covenant blessing. 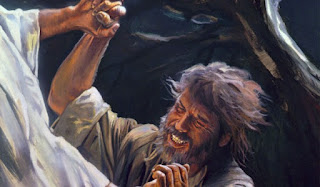 Beginning in verse 28 through the end, Isaiah continues to describe the LORD's greatness and also His goodness.  Have you not known? is asked yet again. The repetition of this phrase is a Hebrew literary form of emphasis.

He does not faint or grow weary!
We humans faint and grow weary, even strong youths, BUT…  not HIM!

This amazing chapter wraps up with verse 31:
But those who wait on the LORD
Shall renew their strength;
They shall mount up with wings like eagles,
They shall run and not be weary,
They shall walk and not faint

Those who wait... the Hebrew word kavah means to eagerly look for, hope, expect.  Literally, it means entwined together like a rope.   It is to be bound together with the LORD like a braided rope. 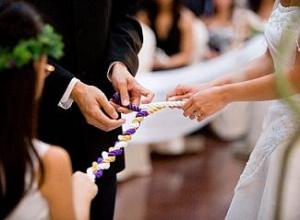 The Hebrew word for renew is chalaph; it means to change, to be changed, as in changing one’s clothing.  An example would be clothing ourselves with Messiah in Romans 13:14. 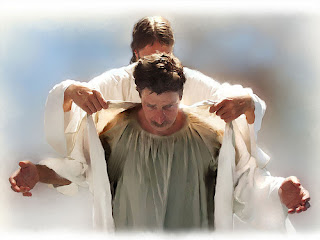 Because HE does not grow weary, if we are attached to Him, we are changed/renewed and will be strengthened and can soar like eagles. 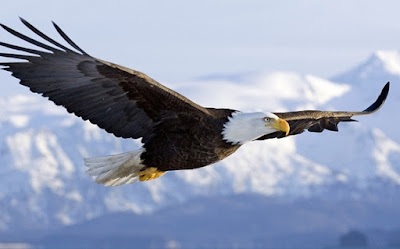 No wonder nations take the eagle as their emblem.


If you would like to start at the beginning of Isaiah, click here.
Posted by Gratefully Grafted In at 9:01 AM