This post is going to fly through several chapters rather quickly.  Put on your seatbelts and prepare to zoom.  We are facing numerous oracles against the countries surrounding and including Israel, beginning in chapter 15.

The first oracle is against kingdom on the King’s Highway trade route, on the east side of the .  The Moabites were the descendents of Lot through one of his daughters.  Lot's other daughter gave rise to their cousins the Amonites, who settled north of .  Today the Jordanian city of is there.

Chapter 16 ends with the remnant of being very small and feeble.  And  indeed collapsed around 400 BC.

Do you remember the most famous Moabite in the Bible? My last post spoke of her - Ruth.  The lineage of Yeshua connects back to Remember, God is in charge and He establishes His purposes whenever and wherever He desires.

will cease from being a city.  This hasn’t happened yet. It is an ancient city that has existed for thousands of years.   But with everything going on today in , we could very well see this prophecy fulfilled today.


Verse 4 switches to and foretells the coming dispersion of the northern kingdom, when the fatness grows lean.  (In chapter 9, do you remember the arrogance of the people in their own power
and wealth?) Yet a remnant of Israel is promised in verse 6, through a picture of grapes and olives.

Verse 10 tells us why… they have forgotten the God of their salvation and the Rock of their stronghold. Their crops will suffer and the harvest will be a heap of ruins.

In verses 12-14, Isaiah again switches focus to the surrounding peoples. It sounds like a picture of today’s refugee situation in Syria, and also what happens to nations that plunder Israel.

See also Psalm 83 and Zechariah 12:3 for more information on what happens to those who come against Israel.


Chapter 18 continues with an oracle against (biblically known as Cush).   Verse 7 tells us that a gift will be brought to the LORD of hosts from these people, up to .  Some say the Ark of the Covenant rests in , at a little church in the . That is debatable. Besides, if you've ever seen Raiders of the Lost Ark, you know that it is in a Washington DC warehouse, right?  (wink)  Personally, I believe the ark is safely nestled somewhere in Jersualem, awaiting the perfect time to be revealed. 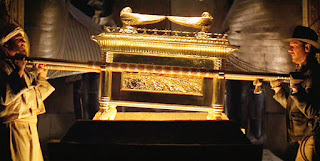 Chapter 19 is an oracle against Egypt (I told you this was going to be a fast ride through this section!). Verse 2, in my opinion, sure seems to describe the Arab Spring of 2011:

“I will set Egyptians against Egyptians;
Everyone will fight against his brother,
And everyone against his neighbor,
City against city, kingdom against kingdom.

The grim prophecy continues through verse 17.  A quick side note:  the Muslim Brotherhood was founded in Egypt in 1932.

However, the following verses give  great hope.  Could they be a fulfillment of the promise made to Hagar millennia ago?  Bottom line:   will know the LORD!  Verse 22 tells us He will strike them and then heal them.

And then the highlight of this chapter, the Highway in verses 24-25:
In that day there will be a highway from Egypt to Assyria, and the Assyrian will come into Egypt and the Egyptian into Assyria, and the Egyptians will serve with the Assyrians. In that day Israel will be one of three with Egypt and Assyria—a blessing in the midst of the land, whom the Lord of hosts shall bless, saying, “Blessed is Egypt My people, and Assyria the work of My hands, and Israel My inheritance.”

I believe this day is coming soon, in conjunction with the return of the Messiah.

In chapter 20, the LORD uses Isaiah as a sign against and , who were about to be invaded by . He was told by the Lord to remove his sackcloth and shoes and go naked for three years. Many scholars say this means the outer garment, and that he was clothed underneath with a simple tunic.

Verse 4 says, in the same way, the king of Assyria will lead away Egyptians and Ethiopians, naked, barefoot, with their rear ends uncovered. (Even back then, nakedness was linked to shame... a lesson we could learn in today's Western world).

This came to pass around 714-711 BC. The northern Kingdom of Israel had fallen just a few years before, in 722 BC.  Another example of God's prophetic words coming to pass!  No other god can foretell the future like our God!

My plan was to cover all the way through chapter 21 in this post.  However, that chapter begs for its own post.  So... two posts today.

Posted by Gratefully Grafted In at 10:35 AM