() was located in modern day , 59 miles from , and today is sanded over, desolate, and in ruins.  I've mentioned this before.  Here is a picture in case you have forgotten:

The chapter is an oracle to the wilderness (desert) of the sea.  This is clearly the  – Arabs themselves call it by this name.  This idea is confirmed in verse 13 - the burden is against Arabia.  Each place mentioned in this chapter – , Dumah, Tema, Kedar – these are all in . Today we call it Saudi Arabia, because after World War I, Arabia was given to the extensive royal Saud family to control.  They had been Bedouins - truly a rags to riches story for them.  More on this later.

In the midst of this oracle against Arabia is verse 9 – fallen, fallen is hat? It is repeated in Revelation 14:8 and 18:2.

Jeremiah also confirms this prophecy in 51:6-9.
Flee from the midst of Babylon,
And every one save his life!
Do not be cut off in her iniquity,
For this is the time of the Lord’s vengeance;
He shall recompense her.
Babylon was a golden cup in the Lord’s hand,
That made all the earth drunk.
The nations drank her wine;
Therefore the nations are deranged.
Babylon has suddenly fallen and been destroyed.
Wail for her!
Take balm for her pain;
Perhaps she may be healed.
We would have healed Babylon,
But she is not healed.
Forsake her, and let us go everyone to his own country;
For her judgment reaches to heaven and is lifted up to the skies.

All this talk of Babylon, yet we know that physical Babylon is buried under sand.  So what is this spiritual Babylon?

Revelation 17:1-5 speaks of a great prostitute on many waters (Arabia is surrounded by water on 3 sides).  Kings have committed fornication with her, the great harlot.

And indeed, Revelation 17:15 says that many nations and tongues are involved.  What sort of worldwide movement has its headquarters in Arabia?

If the harlot Babylon is now on the Arabian Peninsula, how did it get there?

This requires a journey back into ancient history.  We have to go all the way back to the tower of Babel in Genesis 11.  Ancient writings such as the Epic of Gilgamesh, and modern archaeological findings, shed light on what took place back then.

Back in Babel before the dispersion, the people had begun worshipping the host of heaven:  the sun, moon, and stars.  The devil had set up a false trinity, so to speak, with Nimrod, Semaramis, and their son Tammuz.  When the tower was destroyed and the languages confused, this false god/goddess/son trio was carried all over the world, and been found in countless cultures on all continents.

This pattern of sun god, moon goddess and their love child placed emphasis on mother/child worship and the goddess of fertility.

You can google the legend of Nimrod, Semiramis, and Tammuz.   There is much written about them.

These ideas also crept into ancient Israel.  In Ezekiel 8:15-16, the Jewish women are reprimanded as they were weeping for Tammuz, and the men for worshipping the sun.

The Catholics use the term queen of heaven to describe Yeshua's mother, and sadly, Mary has been elevated to goddess status.  In 1854 the pope declared that SHE was conceived without sin.  It had already been long-believed that she was a perpetual virgin.  The history of this doctrine goes back to the goddess Diana of the Ephesians.  It is said that Mary lived out her life in Ephesus under the care of the apostle John.  Ephesus was very much into goddess worship!

When Christianity was taken over by  in the 300s under Constantine (a committed worshipper of Mithra), many aspects of Babylonian goddess worship came along with it.  Pagan festivals were Christianized.  Saturnalia became Christmas.  Jewish festivals were outlawed, including the Sabbath.  The day of worship was changed to SUNday.  Passover became Easter.  Goddess temples were changed to Christian ones.   Pagan priests became Christian priests.  The  was built over a pagan necropolis and Nero’s circus. Many pagan symbols and festivals still exist in the Catholic church, and the Reformation did little to eradicate them.

At the time of Mohammad (7th century AD), the  had 360 different tribal gods based on the Babylonian system.  Mohammad claimed that his tribal god was THE god (which is what Allah means - the god), and he declared all other Arabian gods to be false.  His first wife (out of 11) was Khadija, who came from a Roman Catholic family. Mohammad was greatly influenced by both Jews and Christians who were monotheists.

Islam was founded and spread, based on tribal moon god worship.  Every mosque today has a crescent moon on top. (Because of their patriarchal society, the moon goddess morphed into the moon god).

Well, what do the kings of the earth today want?

The wilderness of the sea, on many waters, was a vast wasteland, populated by destitute Bedouins until the discovery of oil.  Almost overnight,  went from the poorest nation on earth to the wealthiest.

Oil runs the world today.  I'm guessing that for most of us, wherever we go today, we will not walk or ride our camel.  By the way, I don't believe this means you have to sell your car and get a camel.

Remember the long lines at the gas stations in 1974?  I was a little kid then, and I still remember them.  But what I didn't know until recently was that the Arabs instituted an oil embargo against the United States after  helped  in the 1973 Yom Kippur war - thus the oil shortage.

The kings of the world want this oil, and they are willing to kiss the feet of the beast in order to get it. 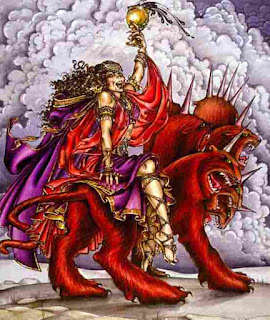 Revelation 18:8-10 tells us that this alternate religious system - evident all over the world in many faiths but culminating in Islam - will be gone in one hour.  All the wealth – gone. Burned up.  (Oil is quite flammable).

How will this happen?  My guess is that Arabia will be destroyed by her own Islamic enemies.  and  hate  because of the wealth.  Sunnis hate the Shiites.  The Syrian conflict is Muslim against Muslim.  More Muslims kill Muslims than they do "infidels." I believe the burning of spiritual Babylon, headquartered on the Arabian peninsula, will be an inside job.

Revelation 18:4 warns us: come out of her, my people!  Leave this false religious system behind and return to pure worship.

All this purging has to happen so that pure worship of the Jewish Messiah, the Lamb of God, will be restored.  All the pagan junk that has crept into the church will be gone.  Hallelujah! 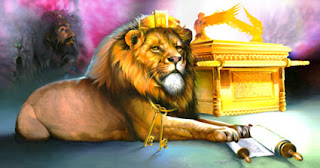 If you would like to start at the beginning of Isaiah, click here.
Posted by Gratefully Grafted In at 10:37 AM