Yom Kippur and Our High Priest

We interrupt our walk through Isaiah to stop and pause for the holiest day on the Jewish calendar - Yom Kippur, or Day of Atonement.

This was the one day a year when the High Priest would enter the Holy of Holies and sprinkle the blood of the bull and goat on the mercy seat. Let's look at Leviticus 16:6-10 for context:

“Aaron shall offer the bull as a sin offering, which is for himself, and make atonement for himself and for his house.  He shall take the two goats and present them before the Lord at the door of the tabernacle of meeting.  Then Aaron shall cast lots for the two goats: one lot for the Lord and the other lot for the scapegoat.  And Aaron shall bring the goat on which the Lord’s lot fell, and offer it as a sin offering.  But the goat on which the lot fell to be the scapegoat shall be presented alive before the Lord, to make atonement upon it, and to let it go as the scapegoat into the wilderness.

First, Aaron the High Priest had to make an offering for himself via the bull.  Then he was able to continue with God's directive to cast lots for the two goats - one which would die for the sins of Israel (known as the Goat of the Lord), and one which would be set free and sent into the wilderness (known as the azazel, or scapegoat). 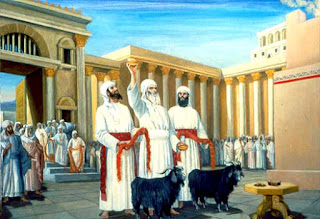 Fast forward to the ultimate sacrificial death of Yeshua our Messiah.  Most believers would acknowledge that He became our Passover Lamb.  But is there also a picture of His high priesthood at His death?

When Yeshua stood before Pontius Pilate, Pilate wanted to wash his hands of the matter and take no blame for what happened.  So Pilate offered the people a scapegoat - Barabbas.  The people accepted the scapegoat and Barabbas was set free.  Yeshua the Messiah then became the Goat of the Lord, the sacrifice that would take away the sin of the whole world. 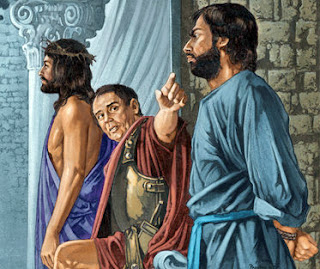 Some ancient manuscripts of the gospel of Matthew have the full name of Barabbas written as Yeshua Bar Abba.  Early church father Origen was troubled by this and declared that the name Yeshua must have been added in by a heretic.  It is likely that later scribes removed this reference.

So we are left with a picture of two similar goats with similar names, one chosen to die and one chosen to be set free, in the very same manner as the two goats in Leviticus 16.

It gets even more interesting.

According to the Talmud (Jewish oral law that was codified in the second century AD and expounded upon), there were several signs by which people would know whether or not God had received their sacrifice and forgiven their sins.

First, the priest would draw lots from an urn as outlined in Leviticus 16.  One lot was written, For the Lord. The other said To the Scapegoat.  The priest would pull both lots out of the urn - one in each hand.  If the priest drew the lot For the Lord in his right hand, that meant that God had received the sacrifice.  However, if it showed up in the left hand, it meant the opposite - that God had rejected the sacrifice.

The Talmud records that from 30 AD to 70 AD, the same result showed up every time - rejected.  The odds of this happening 40 years in a row are over one in one trillion.

Another sign was that a scarlet thread was tied to the horn of the scapegoat, and it would supernaturally turn white when God received the sacrifice.  Part of the red thread would be actually tied to the temple doors - this way the people could see if it turned white or not.

The Talmud also confirms that the thread did not turn white during those 40 years, and then the temple was destroyed in 70AD.

So from the death of Yeshua to the destruction of the temple, the Talmud itself confirms that God rejected the sacrifices, beginning in the year 30.

Yeshua truly IS both our Passover Lamb and our Atoning High Priest.

But Messiah came as High Priest of the good things to come, with the greater and more perfect tabernacle not made with hands, that is, not of this creation. Not with the blood of goats and calves, but with His own blood He entered the Most Holy Place once for all, having obtained eternal redemption.  Hebrews 9-11-12 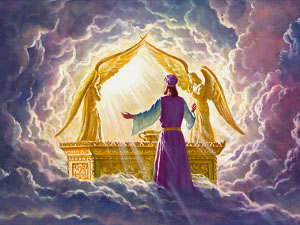 Thanks to Ron Cantor of Messiah's Mandate for the Talmudic information.
Posted by Gratefully Grafted In at 8:19 AM