Isaiah Post 8 - Babylon's Demise both Near and Far (Chapter 13)

In verse 2, a banner is lifted up.  We have discussed the banner before; a rallying point for a cause (see Isaiah post 6). What follows in verses 3-5 is a great assembly of sanctified ones, a multitude of many people.

Isaiah writes,
The noise of a multitude in the mountains, Like that of many people!
A tumultuous noise of the kingdoms of nations gathered together!
The LORD of hosts musters the army for battle.
They come from a far country, From the end of heaven—
The LORD and His weapons of indignation, to destroy the whole land.

Who is this assembled army of the LORD?

If we compare scripture to scripture, we can look to Matthew 24:31 and Revelation 19:14 to get a hint.

And He will send His angels with a great sound of a trumpet, and they will gather together His elect from the four winds, from one end of heaven to the other.

And the armies in heaven, clothed in fine linen, white and clean, followed Him on white horses.

It looks to me like this is His people, gathered together and returning to the earth with King Messiah in the lead. 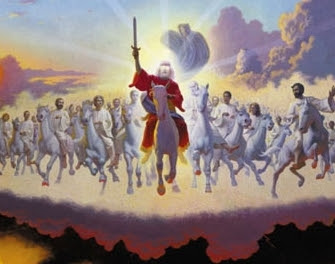 The next section is even more descriptive of the coming Day of the LORD.  Look at verses 6-11.  The scope of events encompasses the whole world, not just Babylon.

Wail, for the day of the LORD is at hand!
It will come as destruction from the Almighty.
Therefore all hands will be limp,
Every man’s heart will melt, and they will be afraid.
Pangs and sorrows will take hold of them;
They will be in pain as a woman in childbirth;
They will be amazed at one another; Their faces will be like flames.

Behold, the day of the LORD comes, cruel, with both wrath and fierce anger,
To lay the land desolate; And He will destroy its sinners from it.
For the stars of heaven and their constellations
Will not give their light;
The sun will be darkened in its going forth,
And the moon will not cause its light to shine.
I will punish the world for its evil, And the wicked for their iniquity;
I will halt the arrogance of the proud,
And will lay low the haughtiness of the terrible.

There are several places in scripture that confirm the darkening of the sun, moon, and stars as a sign of His coming. 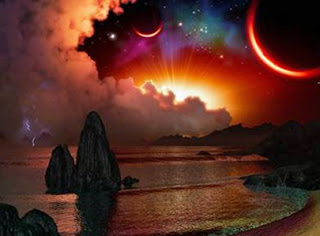 Matthew 24:29 says “Immediately after the tribulation of those days the sun will be darkened, and the moon will not give its light; the stars will fall from heaven, and the powers of the heavens will be shaken.

Joel 2:10-11 says The earth quakes before them, The heavens tremble;
The sun and moon grow dark, and the stars diminish their brightness.
The LORD gives voice before His army, for His camp is very great;
(there's that army again!)
For strong is the One who executes His word.
For the day of the LORD is great and very terrible; Who can endure it?


Like the song says, He's not a baby in a manger anymore.  There are those who still portray Yeshua as meek and mild, but His days as a sacrificial Lamb are over.  He is King of Kings and Lord of Lords, and He is coming soon in great power and great glory, and He will have great wrath against the unbelieving world.

The chapter finishes up with another reference to Babylon.  It foretells of the complete destruction of the city.  The place that was ancient Babylon is located 59 miles outside of modern day Baghdad, and is complete rubble - just as foretold in scripture.  Today, only about 2 percent of the rubble has been excavated.


Interestingly, Revelation chapters 17 and 18 speak of Babylon's future destruction.  Since physical Babylon is toast, we know that Revelation is speaking of something different than the physical city. Ancient Babylon (Babel) was the source of a false religious system that spread throughout the world (in various forms), and this religious system remains a stronghold in the world today.

It is fascinating to note - with all this talk of the sun, moon, and stars going dark - that this ancient pagan system is based on those very elements: sun god and moon goddess worship.  Reading the stars, ie: unbiblical fortune-telling astrology, is also a big part of this pagan system.  This whole system will be defeated and go dark. 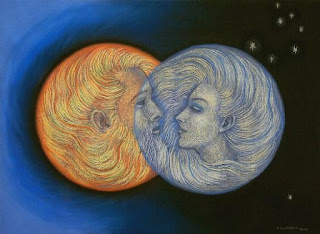 Spiritual Babylon is a huge subject, and will be addressed further in future posts. Stay tuned!


If you would like to start at the beginning of Isaiah, click here.
Posted by Gratefully Grafted In at 11:44 AM