This past weekend, I was privileged to share a Passover Seder with my congregation, most of whom had never experienced one before.  It was an awesome and humbling experience, because I love these dear brothers and sisters in the Lord.  Through Him, they are my family! 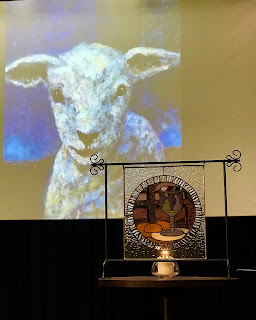 I celebrated my own first Passover meal years ago, in 2008.  A couple years prior to that, a thought had popped into my head, "Where does the word Easter come from?  Isn't Jesus supposed to be our Passover Lamb or something?"

To say I was surprised  by the answer is an understatement.  It was positively life changing.  I am not going to elaborate on that now... you can Google it if you want to.

The question led me to discover God's appointed times and how they all point to Yeshua, our Messiah.  It also gave me a deep, deep love for the Word of God.  I had been a committed follower of Jesus since 1994, but I confess that it took awhile to fall in love with His Word.

That first attempt of mine at hosting a Passover Seder was just that, an attempt.  But I kept at it, learning new things every year and sharing what I was learning with small groups of people who wanted to know more.

Twelve Seders later, I continue to uncover jewels from God's Word.  I marvel at the depth!  I love that He continues to reveal new insights.

This year, during the weeks leading up to Passover, I had been learning more about temple sacrifices.  I knew there was a morning and evening sacrifice during temple times, but I didn't know that they were called the Tamim - the burnt offerings.

In other words, the burnt offering was a perpetual and total sacrifice.

All those other sacrifices that are detailed in Leviticus - the peace offering, the thank offering, the sin offering, and so on were offered daily by worshippers between the hours of 9:00 am and 3:00 pm.  The priests would receive their share, and the remains would be placed on top of the morning sacrifice.

I had known that the Passover lamb was offered at 3:00 pm, but I didn't know the timing of all the other sacrifices.

Yeshua was nailed to the tree at 9:00 am, and He took His last breath at 3:00 pm.  Not only was He the fulfillment of the Passover lamb, but He fulfilled every other sacrifice as well!

The busiest time at the temple during Passover was 3:00 pm, when the evening Tamim would be offered, immediately followed by the Passover lamb.

I try to imagine the scene the moment Yeshua took His last breath.  Scripture records darkness, earthquakes, and the tearing of the temple veil at the moment of Messiah's death - right in the midst of the evening sacrifice and the Passover sacrifice.

The Roman centurion, observing all that was happening, was the first to call it:  "Truly this was the Son of God."

The Holy of Holies in the temple was considered to be God’s dwelling place on earth, and was only accessible once a year on Yom Kippur, and only by the high priest.

I’ve written previously on the significance of the torn veil: we now have access to the Holy of Holies through Yeshua our High Priest.

Biblically, the act of tearing one’s garment was an act of deep mourning, especially when a loved one died. Jewish people still symbolically tear a garment when sitting shiva (observing a seven-day mourning period) for a loved one.

Can you see the prophetic picture of YHWH tearing His own garment in deep agony at the moment of Yeshua’s death? 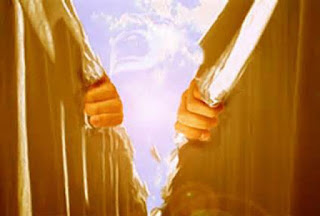 Another insight the Lord gave me this year happened as I was preparing the lamb for the Seder - braised lamb shanks.

Even though lamb is one of the three commanded foods of the Passover celebration, Jews do not eat it for their Seders today due to the absence of the temple, which was destroyed in 70 AD. It occurred to me that Israel as a nation has been without the Lamb for nearly 2000 years.

I believe that is about to change.

As I was cleaning and drying 21 shank bones for my Seder plates, I thought of Ezekiel 37. As I was arranging those dry bones, I pondered how they are symbolic of Israel are coming to life! 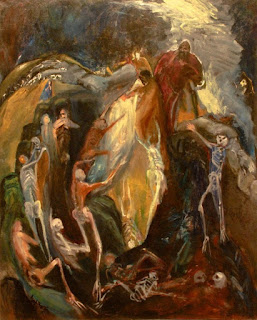 Out of the ashes of the Holocaust, the state of Israel was born in 1948, after 1,878 years. Nineteen years later in 1967, Jerusalem was reunified and under Jewish control again for the first time in over 2000 years.

The hand of God is moving and something big is about to happen.  Are you paying attention?


Posted by Gratefully Grafted In at 10:52 AM