The Gospel In the Lion’s Den

I was doing my daily reading the other day, which included Daniel 6.

Daniel in the Lion's Den... it's a story that many of us have heard since before we could walk, and usually it is ripped out of the context of a righteous man living in pagan Babylon.

As I was reading through it this time, new insights flew off the page for me that I had never noticed before.

The chapter opens with King Darius elevating Daniel to a high position.  This is the third time Daniel was promoted; it happened with Nebuchadnezzer after interpreting the king's dream, and then with Belshazzar after interpreting the writing on the wall.  (Granted, the second promotion only lasted an hour or two).  I wonder what Daniel did to impress Darius?  Maybe Darius just heard testimonies about Daniel, his God, and his steadfastness.  Who knows?

Anyway, Daniel's promotion irritated his fellow governors and satraps.   They knew Daniel was a righteous and faithful man, filled with integrity - so they declared that they would have to trip him up in regard to his God's law.

So these schmucks approached Darius with a piece of legislation that they knew Daniel would disobey.  They appealed to Darius' ego, suggesting that for 30 days, nobody be allowed to worship any man or god but Darius himself.

Darius fell for the ploy, and signed the bill into law.  The unchangeable Law of the Medes and Persians.  It was a ridiculous law that Daniel rightfully refused to obey.


I have often had this fleeting thought while reading about the Law of the Medes and Persians:  why exactly were the laws unchangeable?  Why then, at that point in history?  Many despotic rulers have come and gone and have had no problem changing laws.  Several modern guys come to mind - Stalin, Mao, Kim Jung Un, Hitler.

King Darius was the head honcho.  Why  could he not reverse the law with a kingly declaration?  (This happens again later in the Persian Empire, under King Artaxerxes in the Esther story).

Maybe God is showing us something with the Law of the Medes and Persians.  Maybe it is to demonstrate how His own law is set in stone and unchangeable.

When evil comes, another route must be taken because of the unchangeable law.

C. S. Lewis speaks of this immutable law and the way around it in the Lion, the Witch, and the Wardrobe.  The White Witch declared, "You know that every traitor belongs to me as my lawful prey and that for every treachery I have a right to a kill … that human creature is mine. … His blood is my property."

The Witch in the story was quite right. She had legal claim to Edmund's soul because of his treachery. But Edmund would not die for his sins. Instead, Aslan offered to lay down his life in place of the boy.  In the story, the unchangeable law is called the Deep Magic From the Dawn of Time.  Aslan had to take a different route.

Daniel was condemned by an unchangeable law. The king was forced to obey his own law, even though he liked and respected Daniel. Against his wishes, he had to toss Daniel into the lion's den, because the law required it.  Verse 17 says that a stone was put in front of what looked to be Daniel's tomb, and sealed. (Where have we heard that before?)

Thankfully, YHVH intervened and closed the mouth of the hungry felines.  Daniel was spared.

God has made a law that declares the penalty for sin is death. It is immutable. It cannot be changed. And unless we still happen to be on earth when Yeshua returns, we will pay that penalty through the first death.

But, God did provide a means to get around the immutable law. He provided Himself. He came to earth in the flesh as Yeshua, the Son of Man,  and He paid the penalty for the broken law for us, so that by accepting His payment, we will be raised to life immortal.  We will not suffer the second (and permanent) death.  Yeshua came as the sacrificial Lamb of God. in order to circumvent God's unchangeable law for us.

But Yeshua is no longer the meek Lamb.  Someday soon, He will return to earth as the mighty Lion of Judah, and He will destroy His enemies - just as the enemies of Daniel were destroyed by the lions in Babylon.  He will then rule and reign from Jerusalem, and those who belong to Him will rule and reign with Him. 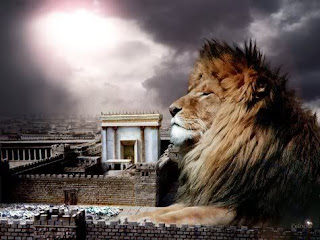 Posted by Gratefully Grafted In at 12:11 PM