The biblical festival of Purim has just ended.  I hope you had a happy Purim!

I recently asked several of my Christian friends if they knew what Purim was, and I received a universal no.

Sigh.  Don't forget to study the first two-thirds of your Bible.  It is filled with treasures!

Before I elaborate on the celebration, I just want to point out something interesting from the scriptures.

There are two books named after women in the Bible - Esther and Ruth.  Both are in the Hebrew scriptures.  One is a Jew who married a Gentile.  The other is a Gentile who married a Jew.  It's like God really intended for there to be One New Man together in Messiah!

So anyway, Purim is a biblical festival, and one of the minor (but fun!) holidays celebrated by the Jewish people today.  You can find it in the book of Esther.

Esther 3:7 tells us that Purim means "lots" in Hebrew.  Evil wicked Haman was irritated at Mordechai the Jew for not bowing down to him.  So in his rage, he threw some dice to determine when and how he should destroy all the Jews in the empire.  The lot finally fell to the thirteenth day of the twelfth month.

So the following month, Haman went to the king (on the thirteenth of the first month) with his evil plan.  The king said, "well, ok, that sounds good to me."  (These ancient kings though... did they give much thought to what they made into laws??)  This nasty plot of Haman's was to be carried out eleven months later, in the twelfth month, on the thirteenth day.

Is this why the number 13 is unlucky?  Just wondering.

The story unfolds as Esther is called upon to go to the king her husband and intercede for her people.  I am not going to recount the entire story here.  You can go read it. 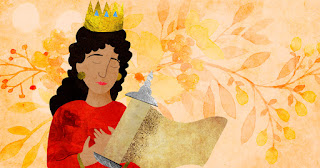 In the end, the Jews prevail.  They are not wiped out, and therefore the Messiah would still be born.  So you can see how the story of Esther affects you and me even today.

And just like Hanukkah, we have an other They-Tried-To-Kill-Us-We-Won-Let's-Celebrate festival.  As followers of the Jewish Messiah, why shouldn't we celebrate it, too?  Are we not grafted in to the commonwealth of Israel and the household of faith?

Esther 9 summarizes the event and the future celebration of said event nicely:

But the Jews who were at Shushan assembled together on the thirteenth day, as well as on the fourteenth; and on the fifteenth of the month they rested, and made it a day of feasting and gladness. Therefore the Jews of the villages who dwelt in the unwalled towns celebrated the fourteenth day of the month of Adar with gladness and feasting, as a holiday, and for sending presents to one another.

And Mordecai wrote these things and sent letters to all the Jews, near and far, who were in all the provinces of King Ahasuerus, to establish among them that they should celebrate yearly the fourteenth and fifteenth days of the month of Adar, as the days on which the Jews had rest from their enemies, as the month which was turned from sorrow to joy for them, and from mourning to a holiday; that they should make them days of feasting and joy, of sending presents to one another and gifts to the poor. So the Jews accepted the custom which they had begun, as Mordecai had written to them, because Haman, the son of Hammedatha the Agagite, the enemy of all the Jews, had plotted against the Jews to annihilate them, and had cast Pur (that is, the lot), to consume them and destroy them; but when Esther came before the king, he commanded by letter that this wicked plot which Haman had devised against the Jews should return on his own head, and that he and his sons should be hanged on the gallows.

So they called these days Purim, after the name Pur. Therefore, because of all the words of this letter, what they had seen concerning this matter, and what had happened to them, the Jews established and imposed it upon themselves and their descendants and all who would join them, that without fail they should celebrate these two days every year, according to the written instructions and according to the prescribed time,  that these days should be remembered and kept throughout every generation, every family, every province, and every city, that these days of Purim should not fail to be observed among the Jews, and that the memory of them should not perish among their descendants.

Today, Jews continue celebrating this event by sending gifts to the poor and to one another, and by dressing in fun costumes.  Oh, and drinking.  I am not sure why this came to be a thing, but in the Orthodox Jewish world, it is a time of sanctioned over-imbibing in alcohol.  Go figure.

So next year, I want to have a costume party for Purim.  Who's in?

Posted by Gratefully Grafted In at 10:36 AM