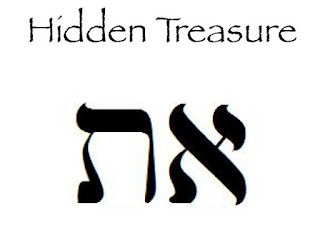 I have been pondering how to wrap up the book of Isaiah, having just finished my final post on chapter 66 a few days ago.

Funny, I didn't plan for 48 posts.  It just happened that way.  Forty-eight is a very special number.  If you do the biblical math, you will discover that Abraham was born in the year 1948 from creation.  And modern Israel was born in the Roman year 1948, fulfilling the nation's rebirth as foretold in Isaiah 66.

So today's post will wrap up with what I hope will be a bridge to Genesis.  I am also hoping this post comes across with clarity, because today's subject is just SO BIG!!

Three times in Isaiah, YHVH - God Himself - is referred to as the First and the Last.  Isaiah 48:12-13 links this idea to the creation of the world.  It is a term that means the whole story.


Indeed My hand has laid the foundation of the earth,
And My right hand has stretched out the heavens;
When I call to them,
They stand up together.

While I was studying the first and last connection to creation in the Hebrew scriptures, I found evidence of this concept hiding in plain sight - right in the very first sentence of Genesis.

Genesis 1:1 is comprised of seven Hebrew words.  This doesn't surprise me.  Scripture uses this number often, and it means completeness.  Here is my transliteration of Genesis 1:1, with definitions:

Beresheet – in the beginning
Bara – created (from nothing, not formed with already-created elements)
Elohim – God (plural word, unity in a diversity)
Et – unstranslatable as a word, but lends to understanding in the grammar (we’ll come back to this)
Hashamayim – the heavens
Ve-et – and/a connector (there is that et again)
Haaretz - the land/earth

Now those seven words give us a picture of completeness on their own, being that the number seven is one of God's favorite ways of showing completeness.  But take a look at that untranslated word et, right there in the very middle, spelled alef tav - the first and last letters of the Hebrew alphabet.

Et has been a word that stumped the ancient scholars of the Hebrew scriptures.  The word is peppered throughout the Tanakh (aka old testament) over 7000 times! The ancient scholars were not clear on what to do with this word.  Our English translations simply don't translate it. It is hidden.

The word et expresses the understanding of a total and all-encompassing completeness. It is equivalent to saying "from  a to z, from first to last, from beginning to end.

Additionally, the word et appears many times paired with objects or names of biblical characters, as a hyphenated compound word.  However, in such cases it is hidden and continues un-translated.  Here are several examples of the appearance of et:

Et appears to be a covenant word.  A hidden signature of the Messiah, so to speak.

Where does this word et show up in Isaiah?  Verse 1:4 tells us that they have et (completely) forsaken the LORD.  Remember, Isaiah started out with a bunch of bad news.  The next occurrence is in Isaiah 6:1, in the vision that sets the stage for the rest of Isaiah’s prophecies.

In the year that King Uzziah died, I saw the Lord sitting on a throne, high and lifted up, and the train of His robe filled et the temple.

On the very day that I was pondering this concept (and not really getting the clarity that I wanted), I opened my daily devotional that I get from George Whitten, a pastor who lives in Israel.  Here is what he wrote.  (Seriously, only God can orchestrate this).  The devotional is in blue:

Friend, trust him to complete what he started!

Isaiah 44:6 Thus says the LORD, the King of Israel and his Redeemer, the LORD of hosts: "I am the first and I am the last; besides me there is no god. (I'd been looking for this verse!)

Rev 21:1 Then I saw a new heaven and a new earth, for the first heaven and the first earth had passed away, and the sea was no more.

Rev 21:6 And he said to me, "It is done! I am the Alpha and the Omega, the beginning and the end. To the thirsty I will give from the spring of the water of life without payment.

The Bible begins with the creation of the heavens and earth, and ends with the creation of a new heavens and a new earth. Thus the Word of God delineates a complete story of everything from the beginning of the created world to the unending eternity toward which we are headed. The scripture also identifies Yeshua as the firstborn over all creation, [Colossians 1:15] and thus the Lord of all time.

In the book of Genesis, the very first verse of the Bible contains the Hebrew word formed from the first and last letters of the alphabet, i.e. aleph-tav. Interestingly, this word is not translated, even though it serves a grammatical purpose as a preposition pointing to the direct object of the sentence. Aleph-tav, nevertheless, may carry an important, if somewhat hidden, meaning, as some commentators see in these Hebrew letters an agent of creation, Yeshua, the image of the invisible God by whom all things were created; [Colossians 1:15-16], the "Aleph and the Tav"...

This identity of our Lord is explicitly expressed in the book of Revelation, for the Bible concludes with the statement that Yeshua (Jesus) is the "Alpha and the Omega". Alpha and Omega are the first and last letters in the Greek alphabet. From the beginning to the end of the biblical narrative, then, we receive the revelation that, as the agent of Creation, Yeshua truly encompasses all that is, and as such, it is only in Him that we find our completeness; as the author of Hebrews declares, He truly is "the author and finisher of our faith; [Hebrews 12:2].

While we're here on earth we are still not completed but remain in the midst of a journey, begun in Him, and pressing, even groaning, toward the blessed hope, the resurrection of our earthly bodies when we will be truly complete. Yes, it is quite obvious -- He's not finished with us yet!

But the Alpha and Omega, in Whom resides all power and wisdom has not yet finished His good work in us. So be encouraged this day – for we can certainly trust the words of Paul when he said, "He that began a good work in you will bring it to completion" [Philippians 1:6], His very identity as Lord of all time and eternity, Aleph-Tav, and Alpha-Omega -- guarantees it!

I love how the mystery alef tav of the Hebrew Scriptures is revealed in Revelation, which the old testament era scholars did not yet have.  No wonder they were perplexed!

Revelation 1:7-8 says this:
Behold, He is coming with clouds, and every eye will see Him, even they who pierced Him. And all the tribes of the earth will mourn because of Him. Even so, Amen.
"I am the Alpha and the Omega, the Beginning and the End," says the Lord, "who is and who was and who is to come, the Almighty."

Compare this passage to Zechariah 12:1 that I mentioned earlier, in which et shows up in the middle of  they look upon Me et who they have pierced. The alef tav of the Tanakh IS the alpha omega of the New Covenant - the Messiah! 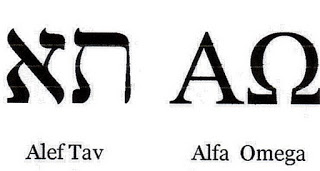 John 1:1 wraps up this concept nicely.

The very signature of the Messiah runs from Genesis to the end of Revelation! He truly is on every page of our bibles.

Now that’s a great way to finish Isaiah and head into Genesis!

If you would like to read all 48 posts on this walk through Isaiah, you may click here to start at the beginning.
Posted by Gratefully Grafted In at 7:24 AM