I am still savoring Genesis chapter one.  I am not sure how long I will camp here.  As we will see today, there is a big tent in which to camp!

My last post talked about the continuity and the miraculous nature of the Bible.  Today I am just going to keep on pondering...

In this book of beginnings, we see the introduction of many concepts which are then completed in the book of Revelation.  Once upon a time... and they lived happily ever after, so to speak.  Consider the following highlights:


See how the story has complete continuity?  And a whole lot goes on between the two books!  It's called human history.  History is His-story! 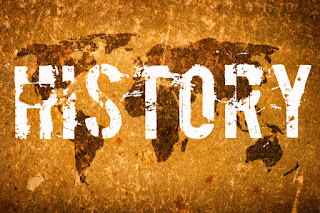 Here is my opinion.  The Hebrew letter bet carries the meaning of a house, tent, or dwelling.   When Jewish couples get married under a chuppah (or canopy), the covering represents the home that they will build together.  The enlarged bet in scripture is not a scribal error; it is a picture of the home that the LORD wishes to build with us.  When the LORD created the earth, this was His intent all along - to dwell with man.  John 1:14 tells us that the Word became flesh and dwelt among us!

So for six days, the LORD worked to create this place where He desired to dwell with us.  All of creation led up to His most important and treasured creation - man, created in His own image!  We are the focus and culmination of creation!  How humbling, that the God of the universe would esteem us in such a manner and want to dwell with us.  If that doesn't give us purpose, I don't know what does.

A couple years ago, I wrote a post on the Spirit of God hovering over the waters from Genesis 1:2.  If you'd like to review it, you can click here.  If you don't want a rabbit trail today, suffice it to say that we are cherished.

So far, I've been avoiding science (just like I did in high school), but to understand Genesis, we must venture down that road at least a little bit.

The transition from verse 1 to verse 2 is where today's gap theory comes from.

In the beginning God created the heavens and the earth. The earth was without form, and void; and darkness was on the face of the deep.

The gap theory imagines that the earth was around for millions of years; that God had created the earth beforehand, complete with animals and plants, and then something happened to cause chaos (and that this is where we get dinosaur bones).  This is also known as old earth creationism, or Ruin-Reconstruction theory.

Personally, I cannot subscribe to such a theory.   You have to add a lot of imagination into God's word to come up with that.  Lots of death and destruction before the six days of creation?!   Before sin entered the world? 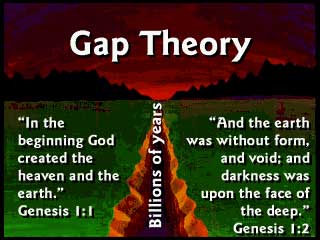 Such belief demonstrates a very Greco-Roman mindset, which emphasizes linear thinking.  (This happened, then this, then this).  But Genesis was written in Hebrew, with a very Hebraic thought process - a very circular way of thinking.  Genesis 1:1 gives us an overview, and then Genesis 1:2 comes back and adds details.  This Hebraic mindset can be seen repeatedly throughout the scriptures.  Even the whole chapters 1 and 2 of Genesis do this very thing.

Also, let me visit Job for a moment for a little pop science quiz from God:

“Where were you when I laid the foundations of the earth?
Tell Me, if you have understanding.
Who determined its measurements?
Surely you know!
Or who stretched the line upon it?
To what were its foundations fastened?
Or who laid its cornerstone,
When the morning stars sang together,
And all the sons of God shouted for joy?

Clearly, the creation of the earth was a one-time deal.  And the angels (sons of God) were there to witness and celebrate the event.

God in Heaven had the company of angels with Him.  But He wanted to enlarge His tent, so to speak, so He created the universe, with mankind as His magnum opus.