My last post left off in Isaiah 66:14, which changed gears in the middle of the verse.  The verse began with the LORD knowing His people, and then switched to the LORD's indignation toward His enemies. Today, we begin with that change of theme.

Verses 15 and 16 open with the word behold (We just looked at this word in my last post. It means Hey! Pay attention!).

For behold, the LORD will come with fire
And with His chariots, like a whirlwind,
To render His anger with fury,
And His rebuke with flames of fire.
For by fire and by His sword
The LORD will judge all flesh;
And the slain of the LORD shall be many. 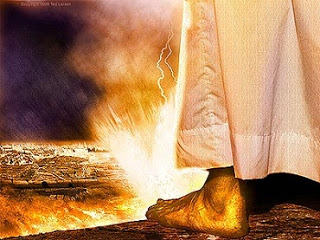 What a vivid scene! Flames of fire everywhere! Biblically, fire means judgment.  Fire both purifies and destroys.  The world is about to be judged.  This is not a picture of a meek lamb.  Remember from my last post: Vengeance is mine, says the LORD.

The Lord’s second coming will be magnificent for His people.  It will be terrible for His enemies. 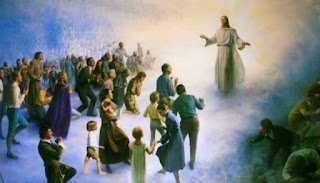 Verse 17 warns us once again against idolatry.  God. Hates. Idolatry.  This warning is given over and over, throughout Isaiah and the whole Bible.

Verses 18-21 are written in Kingdom language:

“For I know their works and their thoughts. It shall be that I will gather all nations and tongues; and they shall come and see My glory. I will set a sign among them; and those among them who escape I will send to the nations: to Tarshish and Pul and Lud, who draw the bow, and Tubal and Javan, to the coastlands afar off who have not heard My fame nor seen My glory. And they shall declare My glory among the Gentiles. Then they shall bring all your brethren for an offering to the LORD out of all nations, on horses and in chariots and in litters, on mules and on camels, to My holy mountain Jerusalem,” says the LORD, “as the children of Israel bring an offering in a clean vessel into the house of the LORD. And I will also take some of them for priests and Levites,” says the LORD.

I believe that in this section, we see an intertwining of Yeshua's first and second comings.  The sign that Isaiah mentions here is the Messiah, and the Gentiles are included throughout this passage. The reference to them who escape probably refers to the ones who survived the destruction of Jerusalem in the year 70 AD, and is also a look ahead to those who will survive the wrath of God at the end of Daniel’s 70th week.  In both cases, His glory will be declared throughout the world.

The end of this section reaffirms that the Gentiles will help bring the Jews back to the Land - to the holy mountain of front and central in God's plan, and still holy today.

“For as the new heavens and the new earth
Which I will make shall remain before Me,” says the LORD,
“So shall your descendants and your name remain.

New heavens and new earth...  Hmm, where have we heard that before?  If you look on the last page of your bible, you will see that it takes place AFTER the thousand-year reign of the Messiah on earth. This is a covenantal promise that Israel will continue forever.  We Gentile believers who are grafted into the commonwealth of Israel are a part of this, together with Israel.

Look at the language of verse 23:

In this verse, time is described here in a totally Jewish way.  One new moon to another, one Shabbat to the next.  The millennium is a Jewish institution and we will be participating.  All mankind  WILL come and bow down before YHVH.  Every knee will bow, every tongue confess...

Isaiah could have ended here.  But no.  He continues with what many consider a strange ending, in verse 24:

“And they shall go forth and look
Upon the corpses of the men
Who have transgressed against Me.
For their worm does not die,
And their fire is not quenched.
They shall be an abhorrence to all flesh.”

More fire.  Let me take a moment and address the phrase about the worms and the fires.  A better rendering of the Hebrew says, where worms don’t die and fires aren’t extinguished.

In Mark 9:48, Yeshua quotes this verse. We see here a metaphor for death, destruction, and the grave. Yeshua was referring to Gehenna, which is one of three valleys in .  Gehenna (or Valley of the Sons of Hinnom) was notorious in biblical times.  It was a place burning with constant fires to consume the waste that was thrown there. The material burned there included everything from household trash to animal carcasses to convicted criminals.  Worms were always present along with the garbage.

Gehenna had also been a terrible place of child sacrifice (see 2 Kings 23:10). It was a nasty place; a place of evil and total destruction.

Jeremiah 7 confirms this:
And they have built the high places of Topheth, which is in the Valley of the Son of Hinnom, to burn their sons and their daughters in the fire, which I did not command, nor did it come into my mind. Therefore, behold, the days are coming, declares the LORD, when it will no more be called Topheth, or the Valley of the Son of Hinnom, but the Valley of Slaughter; for they will bury in Topheth, because there is no room elsewhere. And the dead bodies of this people will be food for the birds of the air, and for the beasts of the earth, and none will frighten them away.

It is very interesting to note that today, Gehenna is not on fire. The west end of Gehenna is lush and green, and as you head around the bend toward the east, it becomes desolate.  Scripture often uses the ideas of west as a picture of blessing and east is a picture of cursing.) When Yeshua returns, I believe that Gehenna will be used once again as a place of destruction for those who have come against the Lord and His people.  The slain of the LORD, as verse 16 warned us at the beginning of this post.

Yes, Isaiah 66:24 is a strange ending to the book.  However, the end of Revelation also includes some of these same warnings.

Rev 21:22-27
But I saw no temple in it, for the Lord God Almighty and the Lamb are its temple. The city had no need of the sun or of the moon to shine in it, for the glory of God illuminated it. The Lamb is its light. And the nations of those who are saved shall walk in its light, and the kings of the earth bring their glory and honor into it. Its gates shall not be shut at all by day (there shall be no night there). And they shall bring the glory and the honor of the nations into it. But there shall by no means enter it anything that defiles, or causes an abomination or a lie, but only those who are written in the Lamb’s Book of Life.

Rev 22:12-17
And behold, I am coming quickly, and My reward is with Me, (from Isaiah 62:11 and 40:10)  to give to every one according to his work.  I am the Alpha and the Omega, the Beginning and the End, the First and the Last.” Blessed are those who do His commandments, that they may have the right to the tree of life, and may enter through the gates into the city.  But outside are dogs and sorcerers and sexually immoral and murderers and idolaters, and whoever loves and practices a lie.

Just as in Isaiah, the warnings to the wicked in Revelation are embedded in the blessings that await God’s people.  It is very sobering.  As I’ve said before, you want to be on the side of YHVH, and heed His word!

As I am sitting here meditating on this post and getting ready to publish it, I keep coming back to the idea of fire.  I was reminded that the LORD once destroyed the earth with water (and promised not to do that again), and that He will eventually destroy the earth with fire before He renews it. For some reason, baptism comes to my mind.  John baptized with water, but the Holy Spirit baptizes with fire.  Another pattern of YHVH?  Food for thought.

To start at the beginning of this series on Isaiah, click here.

Posted by Gratefully Grafted In at 11:15 AM