Today I will wrap up Isaiah 53, the "Fifth Gospel" of the holy scriptures.

My last post made the connection of us being His sheep, and needing a shepherd.  But now, Isaiah switches it around, depicting Him as a lamb.
This is a very detailed prophecy of Yeshua our Passover Lamb.  He was put on trial before Pilate, and before Herod - and yet, He did not defend Himself.   The day was Passover.  The night before (when Passover began at sunset), He had said to the Father, "Not my will but Yours."

Only love could have done this.

Hebrews 12:2 tells us that for the joy set before Him, He endured the cross.

Look at the words of John the Immerser (baptizer) in John 1:29:
The next day John saw Jesus coming toward him, and said, “Behold! The Lamb of God who takes away the sin of the world!

Where did John get this idea? Straight from Isaiah 53:7.

Verse 8 continues:
He was taken from prison and from judgment,
And who will declare His generation?
For He was cut off from the land of the living;
For the transgressions of My people He was stricken.

Yeshua was arrested, imprisoned, and forced to endure a trial that was illegal according to Jewish law.  The verse then asks who will declare His generation (meaning descendents).  This is rhetorical.  Just wait, and the passage will tell us shortly.

We then learn that He is cut off from the land of the living. This means killed. He was killed for the transgressions of others. Again, clearly this is speaking about a man - and not about the nation of Israel, as the sage Rashi taught and Rabbinic Judaism adopted.

Verse 9 goes on:
And they made His grave with the wicked—
But with the rich at His death,
Because He had done no violence,
Nor was any deceit in His mouth.

All criminals were assigned a grave with the wicked (so they wouldn’t defile the other graves), but the body of Yeshua was rescued and buried in a rich man’s grave (Joseph of Aramathea). He was not buried in the place originally assigned to Him. This is a very specific prophecy.

Today, there are over 100,000 graves on the Mount of Olives. You had to be SOMEBODY to be buried there, and it is still true today.

A small rabbit trail...  Jerusalem has two traditional places for the crucifixion and resurrection, one for the Catholic/Orthodox people (built over a temple of Venus) and one for the Protestants (in a garden just north of the Old City). I believe both are incorrect. I believe it all took place on the Mount of Olives, for many reasons.  A few of those reasons can be found here if you are in the mood for yet another rabbit trail.

The second part of verse 9 speaks of His innocence. Yeshua quotes part of this verse when He was speaking to Nathaniel in John 1:47:
Yeshua saw Nathanael coming toward Him, and said of him, “Behold, an Israelite indeed, in whom is no deceit!”

Why does it appear that the Messiah saying Nathaniel is the Messiah? I wrote a post on this subject several years ago. You can read it here if you wish. Sorry for all the rabbit trails today! But it makes much more sense when studied through the Jewish roots of the scriptures.

On to verse 10:
Yet it pleased the LORD to bruise Him;
He has put Him to grief.
When You make His soul an offering for sin,
He shall see His seed, He shall prolong His days,
And the pleasure of the LORD shall prosper in His hand.

Did it really PLEASE the LORD to bruise the Messiah?  A better translation of that Hebrew word chaphets would be desire, will, or favor.  This is what Yeshua was praying in the garden:  Not My will but Yours be done.

Ultimately the reason Yeshua dies is because it is the plan of YHVH, and the plan involves you. He doesn’t just say I love you, He shows I love you.  Most of us know John 3:16 by heart.

Hebrews 12:2 bears repeating: For the joy set before Him, He endured the cross.

The second half of verse 10 speaks of His seed - His offspring - and the prolonging of His days.  This speaks of the resurrection. Remember verse 8, when we are told that He was cut off from the land of the living, and asked, who will His descendants be?

If you know Him, it’s you. We are His descendants, His children.  We are heirs to His kingdom.

John 1:12 tells us,
But as many as received Him, to them He gave the right to become children of God, to those who believe in His name

And 1 John 3:1 says,
Behold what manner of love the Father has bestowed on us, that we should be called children of God!

The first place the word love (ahava) is in the scriptures is in Genesis 22, to Abraham. Take your son, your only son whom you LOVE, and sacrifice him. LOVE is used in the context of sacrifice.


This amazing chapter wraps up with verses 11-12.  Let the words wash over you:

He shall see the labor of His soul, and be satisfied.
By His knowledge My righteous Servant shall justify many,
For He shall bear their iniquities.
Therefore I will divide Him a portion with the great,
And He shall divide the spoil with the strong,
Because He poured out His soul unto death,
And He was numbered with the transgressors,
And He bore the sin of many,
And made intercession for the transgressors.

He bears our iniquities. How many times does this chapter say this? He does not die for His own sin. The servant cannot be Israel dying for its own sin, as the Middle Ages sage Rashi and now all modern orthodox Jews teach. But this is not allegory – He is referred to as a singular person throughout the whole passage.

The picture we see is a separation from God because of our sin. Sin requires death. We approach God, and the sword comes down. Our sinless Messiah steps in and takes it FOR us. He is our substitute. As soon as He dies, it is over. His suffering is done, and He is placed in a rich man’s grave until the resurrection.

The gospel in its simplest form contains two words:  sin and blood. 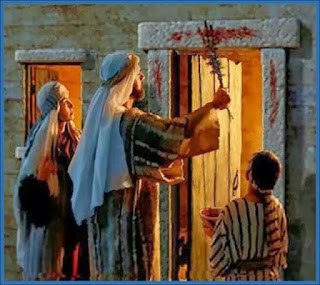 Here is a recap of this section of Isaiah, the “fifth gospel."  It is filled with prophetic promises of atonement by the Servant:

Now that is good news!

To start at the beginning of this series on Isaiah, click here.
Posted by Gratefully Grafted In at 9:37 AM