Most of us know that Yeshua was not born on December 25, but since the eyes of the Gentile world are focused on the birth of Yeshua right now, I thought it would be a good time to post this beautiful reminder from the scriptures.

And the Word became flesh and tabernacled (dwelt) among us, and we beheld His glory, the glory as of the only begotten of the Father, full of grace and truth.   John 1:14

Keep in mind that Yeshua is the Jewish Messiah, foretold over and over again in the Hebrew scriptures.

The Lord Yehovah gave us His feasts (the word for feast actually means appointed times, see Leviticus 23), along with a pilgrimage requirement, so that every time something big was to happen in his plan with mankind, great multitudes of His people would be on hand in Jerusalem to see it.

Naturally, God would send His Messiah to the world during one of His three required annual pilgrimage feasts, when Jews from all over the world would travel to Jerusalem in obedience to the Torah. The inns would be crowded. Many sheep would be in the fields round the clock in preparation for the great number of sacrifices by the pilgrims.

So which feast was it? A careful study of scripture points to the Feast of Tabernacles.

John the Baptist
The conception of John the Baptist would have taken place following Zechariah's time of service in the temple. Luke 1:5 tells us he served in the course of Abijah, which would have been the eighth course of the year according to 1 Chronicles 24. That course falls either just before or just after Shavuot (aka Pentecost to the Gentile world), depending on the lunar calendar. Zehariah would have continued his service through the busy pilgrimage feast of Shavuot, when all priests were required to serve at the temple.  Zechariah's son John would have been conceived by Elizabeth right after that time, as promised by the angel who visited him at the altar of incense in the temple.

(The counting of the courses began at the start of the new year - the first week of the first month Nisan, in the spring.  Passover fell on the third week of the first month, when all priests were required to serve at the temple.  Make sense?  Visit http://biblelight.net/sukkoth.htm for a more detailed description of the priestly divisions).

We know Yeshua was conceived six months after His foreunner and cousin John, per Luke 1:36. This puts the conception of Yeshua smack at Hanukkah, also known as the Feast of Dedication and Festival of Lights.  Isaiah 9:2 says,  The people who walked in darkness Have seen a great light; Those who dwelt in the land of the shadow of death, Upon them a light has shined.  This passage is quoted in Matthew 4 when Yeshua began His ministry.  How fitting that the Light of the World would be conceived at Hanukkah.

John's birth would have coincided with Passover. Six months later we have the seventh feast, the most joyous of them all..  Sukkot!  Sukkot means booths, or tabernacles. It commemorated the Israelites' time in the wilderness, when the Lord Yehovah Himself dwelt (tabernacled) with them. Immanuel - God with us! Yeshua was quite likely born in a Sukkah booth!  Others have concluded a lambing cave, which is quite possible as well, seeing as He is the Lamb of God.  On the Gregorian calendar, the feast of Sukkot occurs in September or October. 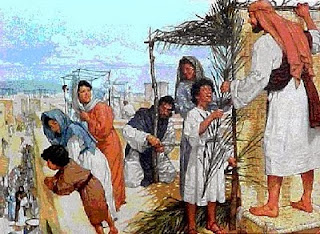 If Yeshua was born on the first day of Tabernacles, then His cirumcision took place on the eighth day. He was given His name and became an Israelite on the Last Great Day of the feast, also called Simchat Torah, a day that celebrates the beginning of a new cycle of Torah reading.  A new beginning for the Word made Flesh. Side note:  In Matthew 1:21, Yosef (Joseph) was told in a dream, And she will bring forth a Son, and you shall call His name Yeshua (meaning salvation), for He will save His people from their sins.

Timing of Yeshua's Ministry
Biblically, it can be shown that Yeshua ministered for three and a half years by counting all the feasts He celebrated.  It makes sense that He began His ministry at the Feast of Tabernacles, because exactly three and a half years later, He became our Passover Lamb.  (Remember, Passover and Sukkot are exactly a half year apart in the Hebrew calendar).  Priests begin their priestly service at age 30.  Does it not make sense that Yeshua would begin His ministry exactly when He turned 30?  God is so precise!

What was the first miracle that Yeshua performed?  It was at a wedding!  The Feast of Tabernacles is a picture of the future Wedding of the Lamb.

Why so hidden?
The timing of Messiah's birth can be gleaned from a close study of scripture.  But why would Yehovah require all the Biblical gymnastics to dig it out?

First of all, in the ancient Hebrew culture, birthdays were not the big deal.  Even today Jews celebrate a deceased person's yahrzeit, a Yiddish word meaning the anniversary of their death.  Perhaps this focus on the yahrzeit is because it looks back and celebrates the life a person lived, and not on the life that was yet to be lived.

The only two birthday celebrations recorded in scripture had less than ideal results.  One was Pharoah's in Genesis 40, whereupon the baker was hanged.  The other one was Herod's in Matthew 14, whereupon John the Baptist was beheaded.  It seems that something about birthdays makes people lose their heads!

The main reason that the details of His birth are recorded in the gospels of Matthew and Luke are to show how the events of His birth fulfilled prophecy.  The gospel of Mark does not even mention His birth, and the gospel of John only mentions the verse which is written at the top of this post:  And the Word became flesh and tabernacled among us, and we beheld His glory, the glory as of the only begotten of the Father, full of grace and truth.

Perhaps Yehovah in His infinite and all-knowing wisdom knew what the celebration of His son's birth (at the wrong time of year) would become.  I wonder what it would be like if the true timing of His birth was restored?  Can you imagine a world with no Black Friday?  No holiday stress?  No overspending?  No fighting over which holiday greeting to use?  Ahhh, bliss. 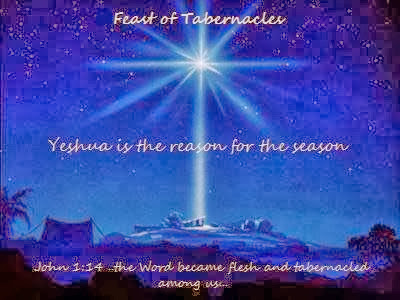 Posted by Gratefully Grafted In at 2:40 PM