God Will Provide Himself a Lamb

Today I was meditating on the akedah, the time when Elohim tested Abraham and asked him to sacrifice his beloved son Isaac. His specific instructions in Genesis 22:2 are this:  “Take now your son, your only son Isaac, whom you love, and go to the land of Moriah, and offer him there as a burnt offering on one of the mountains of which I shall tell you.”

What??  This was Abraham's long awaited, miraculous son!  How could God ask that of him??  But look at the faith that Abraham displayed when Isaac wanted to know what was going on:

Genesis 22:8 says, And Abraham said, “My son, God will provide for Himself the lamb (Hebrew seh) for a burnt offering.” So the two of them went together.

We know the story.

Abraham passed the test, and Elohim stayed His hand.

Genesis 22:13 says, Then Abraham lifted his eyes and looked, and there behind him was a ram (Hebrew ayil) caught in a thicket by its horns. So Abraham went and took the ram, and offered it up for a burnt offering instead of his son. 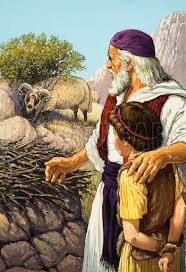 What happened to the lamb that Abraham prophesied?  Lambs and rams are not quite the same thing.

God provided Himself - the Lamb - about 1000 years later, who was sacrificed on the very same mountain that Abraham passed the test.

John 3:16 is a fulfillment of the shadow that was cast in Genesis 22:2...  For God so loved the world that He gave His only begotten Son, that whoever believes in Him should not perish but have everlasting life.

Posted by Gratefully Grafted In at 9:25 AM