Hanukkah - Past, Present, and Future

This year we celebrate an early and unique Hanukkah (meaning dedication); the only time in our lifetime when Hanukkah converges with Thanksgiving.  The last time it happened was 125 years ago, and because of the nuances of the calendars, it will not happen for another 70,000+ years.

In other words, never again. 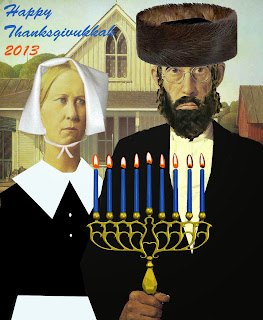 Going back a few centuries, we can discover that the first Thanksgiving in America, celebrated by the Pilgrims, was based on Sukkot, or Feast of Tabernacles.  This seventh feast of the Bible can be likened to a Jewish Thanksgiving.  Sukkot has always been a time of celebration after the last great harvest of the year (and has a future fulfillment of the last great harvest of the Earth). 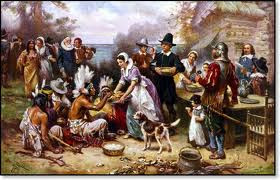 Going back even further, we discover that Hanukkah was a celebration to re-dedicate the refurbished holy temple in 165 BC.  It had been desecrated by the Syrian ruler Antiochus IV, who was then defeated by a small but feisty band of Jewish fighters known as the Maccabees.

What you may not know is that this particular celebration of Hanukkah in 165 BC was also based on Sukkot - in particular the Sukkot when Solomon dedicated the first temple in I Kings 8.  They were having such a blast at that dedication that Solomon decided to add a second week to the festivities, and finally on the eighth day of the second week, he sent them home.

This year's "Thanksgivukkah" brings them all together again.

In this period we live in, between the previous second and future third temples, the Word tells us that we ARE the temple of the Holy Spirit.

Do you not know that your body is a temple of the Holy Spirit, who is in you, whom you have received from God?  You are not your own; you were bought at a price.  Therefore honor God with your body."  I Corinthians 6:19-20 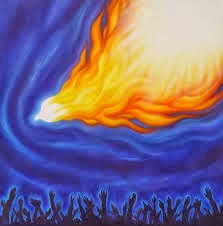 Thinking about the cleansing and rededication of the Temple - that Hanukkah commemorates - reminds us that we are to be continually cleansing and dedicating our lives and our bodies to the service of the Lord.  This dedication is not a one-time event, but a continual process of sanctification that lasts the rest of our lives.
Hanukkah Future
This will also have a future fulfillment when the third temple will be re-dedicated after the desecration by the antichrist.
The book of Daniel gives us a prophecy of the last seven years of history.  Without going into too many numerical details, after sixty-nine weeks (seven-year periods), a Messiah was to show up and then be cut-off (meaning be killed).  Guess who showed up 483 years after this prophecy?  The math shows Him riding into Jerusalem on a donkey at exactly the right time.
When the Jews as a national body rejected the Messiah, that seventieth week was put off until a future time so that the kingdom could be offered to the Gentiles.

(Thank you, Lord, for the opportunity to join Your kingdom!)
Daniel 12 speaks of the horrible things that will happen during the second half of that 70th "week," which will last 3 1/2 years.  Revelation speaks of 1260 days, and Daniel speaks of 1335 days.  Why the extra 75 days?
It is interesting to note that there are 75 days from Yom Kippur to Hanukkah.  While we cannot dogmatically predict how every element of the fall feasts will be fulfilled, it seems to me that the national salvation of Israel on a future Yom Kippur will be followed by the third temple's dedication (or re-dedication) 75 days later.
And the best part of all this is that the Lion of Judah - Yeshua, our King of Kings - will be present during all the festivities! 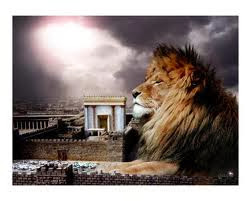 Posted by Gratefully Grafted In at 9:07 AM