My friend whom I call “Al,” had a wonderful insight the other night.  He had been reading in the gospel of Mark, chapter 5, when he noticed a similarity between the bleeding woman who touched the hem of Yeshua’s tunic and the little girl that was raised from the dead.

“Hey,” said Al.  “The woman had been bleeding for twelve years, and the little girl was twelve years old! Do you think there's a connection?”

I had read that story many times and never noticed that similarity before.  Al, you're a rock star! 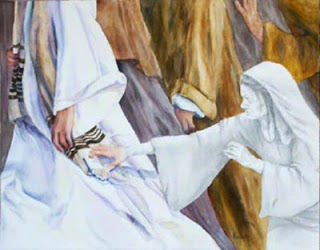 I couldn’t resist digging into this one.  What could it possibly mean?  After all, nothing is in scripture by mistake – every detail means something, and quite often there is more than one layer of meaning. Scripture often gives us a snapshot of something else that is going on, and this is no exception.

The two stories are really one interconnected story.  There are numerous "opposite doubles" that are featured in the accounts. 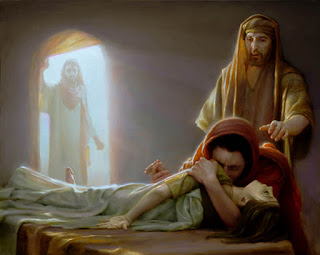 Here are my thoughts.  First of all, the account mentions the number twelve twice.  Twelve represents divine order or divine government.  The twelve tribes of Israel and the twelve apostles come immediately to mind.  This tells me that something about this story has to do with the Kingdom of God.


The woman, aware of her uncleanness, comes humbly to her Lord for healing.  She is healed because of her great faith.  I believe that she represents everyone in history - both Jew and gentile - who has or who will humbly come to faith in the Messiah before He returns.

On the other hand, I believe that Jairus, the religious ruler, represents unbelieving Israel, who will be enlightened unto salvation when Yeshua returns and reveals Himself to his brethren.  Romans 11:15 says, “For if their being cast away is the reconciling of the world, what will their acceptance be but life from the dead?”


By the way, the name Jairus means “God will enlighten you.”

Update:  I actually wrote a second post about this very story, clarifying a couple things.  You can find it here.
Posted by Gratefully Grafted In at 8:19 PM