Israel - Riches For the World, Pt 1

So, what's the big deal about Israel?

For many of us, Israel has been a country our whole lives, so it doesn't occur to us to think any differently.  Many people don't realize that for almost two thousand years, Israel was NOT a country.  And most people don't realize what an absolute MIRACLE it is that Israel exists again today.  The fact that Israel is once again a country proves that God keeps His promises, and that His word is trustworthy!

Let's look at two (of the many)  examples from the scriptures that tell us about Israel's homecoming:

Isaiah 11:12  He will set up a banner for the nations,
And will assemble the outcasts of Israel,
And gather together the dispersed of Judah
From the four corners of the earth.

The time window for Israel to become a country was very small.  In the late 1940s, Hitler had just slaughtered millions of European Jewry.  On November 29, 1947, the newly founded UN voted to partition the area of "Palestine" in order to give the Jews their own homeland.  The vote was 33 for and 13 against, which fulfilled the two-thirds requirement by three votes.  Soon after, anti-Semitism developed in the UN and resurfaced around the world, which would have made a later vote on Israeli statehood unsuccessful.

However, the miracles in Israel continued, as she survived - against all odds - five different wars with her Islamic neighbers (who greatly outnumbered Israel in every way).   It sure seems like the One True God has been protecting her, and getting ready to fulfill all things which still must take place - in Israel!  Look at this map, which shows Israel (that tiny little red speck) surrounded by Islamic nations who hate her, and then do the math regarding the odds of her survival.  Only God! 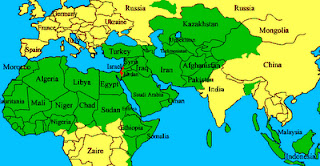 The reason so many in the world hate Israel is because satan knows his time is short, and that with Israel re-established, God's plan will move forward. So he works hard to stir up a spirit of Haman (who wanted to annhilate the Jews in the time of Queen Esther) throughout the nations of the world.   Don't let this spirit of Haman get a foothold on you... bless God's chosen people Israel just as they have blessed you!  (Gen 12:3)

Look at Amos 9:14 again (above).  Scripture promises that the wasteland will be restored.  Here another mention of the promise:
Isaiah 35:1 - The wilderness and the wasteland shall be glad for them,
And the desert shall rejoice and blossom as the rose

Mark Twain visited Israel in 1867.  Here is an excerpt from his book Innocents Abroad regarding the land of Israel:

“….. A desolate country whose soil is rich enough, but is given over wholly to weeds… a silent mournful expanse…. a desolation…. we never saw a human being on the whole route…. hardly a tree or shrub anywhere. Even the olive tree and the cactus, those fast friends of a worthless soil, had almost deserted the country.”

When the Jewish people began to return to Israel from the four corners of the earth, they were met by malaria-ridden swamps and barren deserts.  The people that had been living in "Palestine" had not done anything at all to make the desert bloom.  Soon after the Jewish people began arriving, an agricultural transformation began, just as promised in scripture.

Today, Israel is the third largest exporter of fresh-cut flowers, valued at $140 million per year.  Israel not only produces enough food for its citizens, but also exports 20 percent of its agricultural products to the rest of the world!  Bananas (a warm-climate fruit) are grown in the Jordan valley, while five miles away, apples (a cooler-climate fruit) are produced.  Israel is a world leader in agricultural technology and is the most water-efficient country in the world, using technology and recycling to maximize its use.

And as far as the desert blooming, what is happening in the Negev (the desert in southern Israel) right now is nothing short of amazing!  Agricultural technology makes use of the brackish (salty) water of the desert to grow amazing vegetables such as tomatoes, eggplants, yellow melons, grapes, pears, and potatoes.  Don't believe me?  Check out the video link on the following website for more information on the Negev - it's really quite amazing!

Today is an exciting time to be alive!  As God's hand moves in and on Israel, the rest of the world benefits as well.  That will be the subject of my next post.

Posted by Gratefully Grafted In at 10:35 AM

Email ThisBlogThis!Share to TwitterShare to FacebookShare to Pinterest
Labels: Israel