Today we are halfway through the seventh Biblical feast - The Feast of Tabernacles. We look forward with anticipation to the God of the Universe fulfilling this appointed time very soon! This morning in church, our pastor spoke of the dedication of Solomon's temple, which happened to also take place during the Feast of Tabernacles. I'm not sure if he even knew that Tabernacles is being celebrated this very week!

Remember, the seven Biblical feasts are a "mural" of God's redemptive plan with His people. The four spring feasts were fulfilled at His first coming to Earth, and the last three autumn feasts are awaiting fulfillment at His second coming.

Tabernacles is the seventh feast, celebrated in the seventh month, is seven days long, and there were 70 bulls sacrificed every year. The number seven again! Remember, seven in scripture represents completeness.

The Jewish people celebrate the Feast of Tabernacles by building and dwelling in "Sukkahs," or booths. This symbolizes the time spent in the wilderness - forty years - in temporary dwellings, with God's presence in their midst, in the tabernacle itself. The time in the wilderness taught them to trust God, and He lovingly cared for them during that time - giving them food and water to eat, and not allowing their shoes or clothing to wear out.

Tabernacles also foreshadows the Wedding Feast of the Lamb. Hebrew weddings in scripture lasted seven days, and they were extremely joyous events. Even today, Jewish weddings are so awesome! I used to work for a caterer in a special event facility, and some of the grandest events held there were the Jewish weddings.

I have come to believe that Tabernacles is a likely time for Yeshua to have been born. It makes sense with the idea of Immanuel - God With Us. Also, being as He is the Alpha and Omega, it makes sense in my brain that the same day would fulfill the beginning and the end. And if He was born as Tabernacles began, He would have been circumcised on the eighth day, which is the celebration of Ingathering - also a holy day.

Of course, we can't be certain on this one, since God didn't chose to reveal the date in scripture - and I'm sure He has His reasons for that. However, I am pretty certain that he was NOT born on December 25. Don't get me started on that one... I'm sure I'll be posting more on THAT after Thanksgiving.

For a few years now, I have wanted our family to build a temporary shelter and celebrate in a Hebrew way. But time got away from me again, so I will have to let my chickens do the celebrating for us. They are living in their temporary sukkah in the backyard - and, ahem, awaiting a different sort of feast. 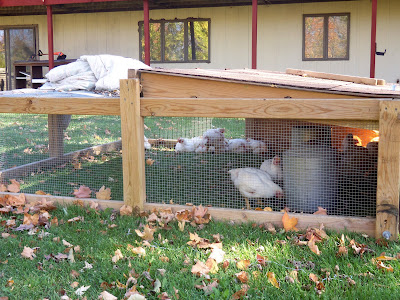 If you would like more understanding on how the Feast of Tabernacles is celebrated today among the Jewish people, I highly recommend the movie "Ushpizin," which is the Hebrew word for visitors. The movie was filmed in Israel by some orthodox Jews. And unless you understand Hebrew, you will need to turn on the subtitles. We loved this movie!

Posted by Gratefully Grafted In at 11:10 AM