I was in the car today, and was struck by a thought.  Our church is in the middle of a week-long missions festival, which is probably why I have been pondering this.

Acts 1:18 says, "But you shall receive power when the Holy Spirit has come upon you; and you shall be witnesses to Me in Jerusalem, and in all Judea and Samaria, and to the end of the earth.”

The church always says that this means missionary work begins in your backyard.  Then you can start thinking about your county.  And then about the rest of your country.  And only then the world.

But what if the scripture means exactly what it says?  That witnessing should start in Jerusalem?  The apostles followed that very directive... beginning in Jerusalem and then fanning out.  This makes sense because Jerusalem is where it all started.

So, was that directive only for the apostles, or is it something we should also take to heart?  Romans 1:16 says, "I am not ashamed of the gospel, because it is the power of God for the salvation of everyone who believes: first for the Jew, then for the Gentile." (Most people forget the second part of that verse when reciting it).

I visited a huge church a few weeks ago, and they too were having a missions fest.  Many giant flags were hanging all around the sanctuary.  The green Saudi Arabian flag was prominently displayed right up front.  (I wonder if that pastor knew that the Arabic words on it - above the sword - say "There is no god but Allah and Mohammad is his prophet.").  He did let me know that the flags represented the missionaries that they support, which is not a bad thing.  If God is calling you somewhere, it is in your best interest to obey Him (read the account of Jonah if you are unsure of this).  But I noticed there was one country's flag that was conspicuously absent: 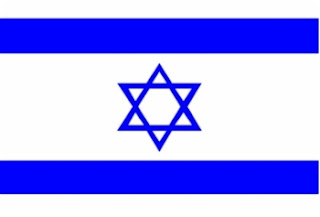 What if my backyard here in little Mayberry is actually part of "the ends of the earth," and not my own personal "Jerusalem"? I'm just sayin...

Next year in Jerusalem!
Posted by Gratefully Grafted In at 9:31 PM

Email ThisBlogThis!Share to TwitterShare to FacebookShare to Pinterest
Labels: Israel