The Letter to the Congregation at Laodicea

The final letter to the seven churches is to Laodicea.

And to the angel of the church of the Laodiceans write,
‘These things says the Amen, the Faithful and True Witness, the Beginning of the creation of God:  “I know your works, that you are neither cold nor hot. I could wish you were cold or hot.  So then, because you are lukewarm, and neither cold nor hot, I will vomit you out of My mouth.  Because you say, ‘I am rich, have become wealthy, and have need of nothing’—and do not know that you are wretched, miserable, poor, blind, and naked—  I counsel you to buy from Me gold refined in the fire, that you may be rich; and white garments, that you may be clothed, that the shame of your nakedness may not be revealed; and anoint your eyes with eye salve, that you may see.  As many as I love, I rebuke and chasten. Therefore be zealous and repent.  Behold, I stand at the door and knock. If anyone hears My voice and opens the door, I will come in to him and dine with him, and he with Me.  To him who overcomes I will grant to sit with Me on My throne, as I also overcame and sat down with My Father on His throne.
“He who has an ear, let him hear what the Spirit says to the churches.”


The word Laodicea means customs or judgements of the people. The time represented by this church began in around the 1900s and will continue until the Lord returns.  Remember that there is some of each church present during each time period, but the letters outline the main happenings of each era.

Laodicea was a very wealthy city – famous for gold and banking, located between Colosse (known for its refreshing ice cold water) and Hieropolis (famous for hot springs). The city was also known for its special breed of black sheep, which produced wool for the expensive black fabric that Laodicea was known for.  The city had no defenses – armies would take over and they would succumb to them.  Finally, Laodicea had a medical clinic in the city that was well-known for its eye salve.

Laodicea had no water of its own; it had to be piped in from the neighboring cities and was nasty - lukewarm.  So many commentaries say that this was a lukewarm church, and that God would wish them to be hot or cold instead.  As if being cold in your faith was a good thing?   Both hot and cold in this letter were good and refreshing.These were not passive believers, these were religious unbelievers.  They had not been born again.


It is stressed in the beginning of this letter that He is Faithful and True - unlike the church.  It was a false church, succumbing to the "armies" around it.  It is interesting to note that the creation of God is mentioned.  One of the great heresies of the end-times church denies the creation and promotes evolution instead.  Today's politically correct church does not want to mention the atoning blood of Yeshua as being the only way to God.  Many churches today have succumbed to many other liberal ideas as well - such as the Bible is obsolete, inviting Muslims to prayer meetings (claiming that we serve the same God), ordaining homosexuals (claiming they were born that way, so it's fine), etc.

2 Timothy 3 says:  But know this, that in the last days perilous times will come:  For men will be lovers of themselves, lovers of money, boasters, proud, blasphemers, disobedient to parents, unthankful, unholy, unloving, unforgiving, slanderers, without self-control, brutal, despisers of good, traitors, headstrong, haughty, lovers of pleasure rather than lovers of God,  having a form of godliness but denying its power

The good news is that God loves the people of Laodicea!  He gives them three appeals.  He says they are poor, naked, wretched, and blind (in the midst of wealth and gold, expensive black clothes, falsehood, and eye salve).  But He loves them and wants to give them a white robe, which represents salvation (Revelation 7).   He knocks at the door.  Notice the picture below - there is no doorknob on the outside.  It must be opened from within.  This church is ruled by people, with God on the outside. 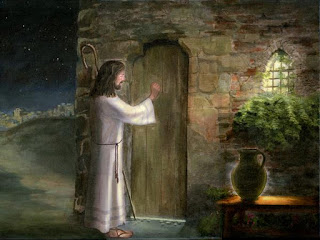 The church of Laodicea will be refined during the end.  It will be a tough time - many will fall away, but others will heed the warning.

Posted by Gratefully Grafted In at 7:27 AM