The final chapter of Genesis finds Joseph weeping over his father who has just passed away. He arranges for a grand Egyptian brouhaha which includes an embalming process and 70 days of mourning.

This was a big honor, as Egyptian royalty were mourned for 72 days.

This is probably the most elaborate funeral depiction in all of Scripture. The first twelve verses are dedicated to its description. Jacob is the last of the patriarchs, the last link to the ancient world. His grandfather hung around with the sons of Noah. Scripture often reminds us that we serve the God of Abraham, Isaac, and Jacob.

When the mourning is over, Joseph appeals to Pharaoh to request a trip to Hebron to bury his father, promising to return.  Did he think Pharaoh would doubt his return?

Of course you must go, says Pharaoh.

A huge number of people head to Jacob's burial in verses 7-9, including Joseph's entire household, the brothers, chariots, horsemen, and a huge list of who's who in Egyptian gentry.  The only ones left behind were the little ones and the flocks (and I assume servants or nursemaids to care for them).

Now Joseph’s brothers are a little nervous. They think that now that Jacob is dead, Joseph will hate them and punish them for the evil that they did. They have no problem admitting that it was evil.They put it on their dead father, and they were probably telling a fib here. He told us to tell you this.

How does Joseph react? He cries. Guys, don’t you really believe that I actually have forgiven you??

One thing I have noticed about the whole story of Joseph is that he is never once portrayed as unrighteous.

Here we have another prophetic picture of Yeshua, in that Yeshua had no sin. I’m not saying Joseph had no sin, but it is never portrayed in this account of his life. The closest he comes is when he brags to his brothers about his dreams. But even that is a picture of Yeshua… Making bold, audacious claims that irritated his brothers, even though the claims were true.

Joseph tells his brothers, yep, what you did was evil, but God meant it for good. He does not sugar coat the sin of his brothers; he tells one truth, but then he tells an even greater truth.

In the case of Yeshua, the Jewish leaders meant his death for evil.  But of course, God meant it for good because it was the instrument that would save the whole world.

Joseph then speaks kindly to his brothers and assures them that he would take care of care of them and their little ones. And he does. He does not just tell them his love, he showed them his love by his actions. In the same way, our Messiah takes care of us.

Then we see that Joseph lives for exactly 110 years, which is the Egyptian ideal. He was blessed to see three generations of his descendants live. The chapter wraps up with Joseph’s death.

The funeral of Joseph is very short and sweet, at least what is recorded of it in the final three verses of Genesis. It is nothing like Jacob’s.  Could this be another parallel to Yeshua, whose time in the grave was so short?

Genesis ends with the promise of the land. Joseph knows he does not want his bones left in a strange land, but desires to be buried in the land of is forefathers - the land that God promised Abraham as an everlasting promise.

Thus ends the magnificent and foundational book of Genesis.  Here is a quick recap:

The first eleven chapters give us details on the creation of the world, the nephilim, the flood, the Tower of Babel, and the early nations.

Beginning in verse 12 and for the remainder of the book, the focus narrows greatly to the formation of the nation of Israel, beginning with faithful Abraham.

Peppered throughout the book is God’s repeated promise of the land (Israel), the Seed (the Messiah), and the blessing (salvation to the whole world). Such a foundational truth that has great implications for us even today.

I will end this series with my favorite piece of artwork, painted by a messianic believer in the land of Israel. 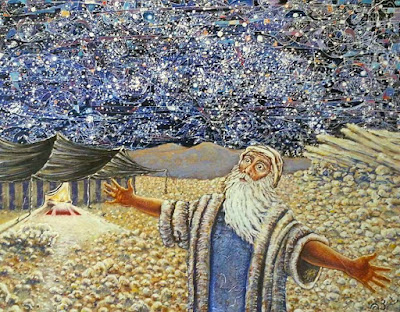 Posted by Gratefully Grafted In at 8:07 AM