Musings on the Crucifixion, Part 1

In the past few weeks, new insights have been introduced to me, from various sources, regarding the Jewish roots of the crucifixion.  So bear with me as I ponder these things here.

The first thing that has come up is the account of the rooster crowing at Peter's third denial.  Ancient writings show that chickens and roosters were not allowed in Jerusalem during Passover, because they were unclean.  (I have raised chickens and roosters and can very much attest that this is true).

I then discovered that the term "crowing of the rooster" actually was a euphemism for the first and last blowings of the shofar each day by the priest at the temple.  When the priest blew that shofar early on that Passover day when Yeshua became our sacrificial Lamb, it was the last legitimate shofar blow of the priesthood.  Yeshua was about to fulfill the priesthood by becoming our High Priest. 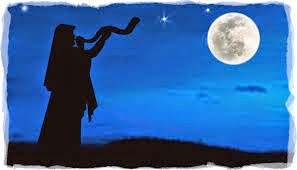 One other verse of interest in this regard comes from Mark 14:51, a seemingly random and odd scripture:  Now a certain young man followed Him, having a linen cloth thrown around his naked body. And the young men laid hold of him, and he left the linen cloth and fled from them naked. 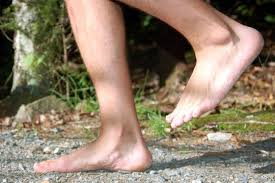 Moving on to the trial of Yeshua...

The people had a custom of having a prisoner released to them at Passover.  Pilate saw not fault in Yeshua and wanted Him to be that released prisoner.  However, the people demanded Barabbas.

Barabbas means "Son of the Father."

So you have two men, both of them the Son of the Father.  However, one was released, and one was killed.  In this respect, Yeshua the Messiah fulfilled not only the role of the Passover Lamb, but of the goat that was sacrificed by the priest at the Day of Atonement.  See these words from Leviticus 16:7-10:  He shall take the two goats and present them before the Lord at the door of the tabernacle of meeting. Then Aaron shall cast lots for the two goats: one lot for the Lord and the other lot for the scapegoat. And Aaron shall bring the goat on which the Lord’s lot fell, and offer it as a sin offering. But the goat on which the lot fell to be the scapegoat shall be presented alive before the Lord, to make atonement upon it, and to let it go as the scapegoat into the wilderness. 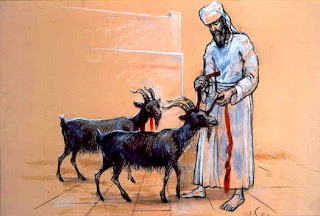 Wow.  God's word is so precise... so many patterns are evident.  Yeshua the Messiah became the One to Whom the LORD's lot fell, and He was killed as a sin offering.  Barabbas became the scapegoat and was set free alive.

My next post will address several additional aspects of the crucifixion.

Posted by Gratefully Grafted In at 1:04 PM