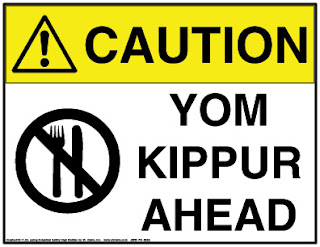 Yom Kippur (the Day of Atonement), which begins at sundown tonight, is the most solemn day in the Jewish calendar. The Bible prescribes Yom Kippur as a day of affliction (Lev. 16; 23:26-32). In the ancient world, the High Priest woke up early, donned his priestly garments, and sacrificed a bull for both himself and his family. He then cast lots over two goats, choosing one for the Lord and designating the other as the goat to remove sin. Only on this day did the High Priest enter into the Holy of Holies in the Temple to offer incense and sprinkle blood on the Ark of the Covenant. Before concluding the sacrifices by burning both the bull and the goat, the High Priest placed blood from the Lord's goat onto the second goat. He then cast the second goat into the wilderness, thus symbolically removing Israel's sin.

In modern observance, Yom Kippur involves a fast from both food and drink. Many spend the entire day praying in the synagogue. During the Ten Days of Awe preceding Yom Kippur, many Jewish people give tzedakah (charity) which some consider a replacement for the animal sacrifice. A small segment of the Orthodox Jewish community practices kapparot, a ceremony in which a person waves a chicken over his head, before killing the chicken as a symbolic transfer of sin. According to tradition, the Book of Life and the Book of the Dead are closed on Yom Kippur, and the fates of those within the books are sealed for the coming year.

Followers of Yeshua the Messiah confidently look forward to eternal life, because our names are written in the Book of Life. When He died, the veil of the Holy of Holies ripped in two, symbolically breaking a barrier between humans and the presence of God. Previously, only the High Priest had access to this room, and he only entered it once a year on Yom Kippur (Matt. 27:51).

However, Yeshua's death gives believers access to God, because He entered into the Heavenly Holy of Holies to offer His blood for our redemption (see Heb. 9:11-12). Unlike the Israelites' annual sacrifices on Yom Kippur, Yeshua's one sacrifice continues to provide atonement to this day. Yom Kippur, for followers of Yeshua, reminds us of the certainty of our redemption through the blood of our Messiah and High Priest, Yeshua.  It is no mistake that Yeshua means salvation.

Yom Kippur also reminds us of the ultimate salvation of the Jewish people. The prophet Zechariah speaks of a day when the nation of Israel will recognize her Messiah and "they will mourn for Him as one mourns for his only son" (Zech. 12:10). When the Jewish people recognize Messiah, as Paul writes, "All Israel will be saved" (Rom. 11:26). The Day of Atonement thus reminds us of our own salvation and also looks forward to the salvation of Israel.

The final Feast, Sukkot, will be five days after Yom Kippur and is the most joyous Feast of them all!  My next post will feature a picture of the first sukkah that I have ever built.  It is still in progress but will be done soon.  Come back soon and read more about Sukkot, The Feast of Booths!  Find out why I believe that Yeshua was born on the first day of Sukkot.

PS.  Thanks to Chosen People Ministries for help with the details of Yom Kippur.
Posted by Gratefully Grafted In at 6:30 AM