Feast of Sukkot... The Granddaddy of Them All!

Sukkot... Booths... Tabernacles... Ingathering...  It goes by numerous names.  It is the seventh and final feast of the seven outlined in Leviticus 23.  For the Jewish people, it is a celebration of great joy!  People look at me funny when I tell them that I, a non-Jewish person, am joining in the celebration. 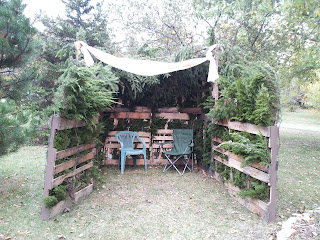 Under the Mosaic Covenant, it was a pilgrimage feast; meaning that the Jews were required to travel to Jerusalem for the celebration.  However, Zechariah 14:16 tells us that this will be a feast for all the nations in the future kingdom, after the Lord returns (The Millenium):

And it shall come to pass that everyone who is left of all the nations which came against Jerusalem shall go up from year to year to worship the King, the Lord of hosts, and to keep the Feast of Tabernacles (Sukkot).

As I mentioned, the feast is a celebration of great joy.  It celebrates both God's provision and God's presence.  It looks back to the time in the wilderness, when God dwelt among His people in the Tabernacle in the wilderness.  It looks back to the time when God sent His son, Emmanuel, to dwell among us (more on this in a minute), and it looks forward to the time when God will dwell with His people once again on the Earth in the future kingdom!

There are two elements associated with Sukkot that deal with God's provision and presence:  water and light.  Sukkot is the end of the harvest and the beginning of the rainy season.  The water represents God's provision in sending rain to the earth.  The light represents His presence.

In John chapters 7 and 8, Yeshua was in Jerusalem for the Feast of Booths, and in that context He speaks of both water and light.  7:37-38 says, On the last day, that great day of the feast, Jesus stood and cried out, saying, “If anyone thirsts, let him come to Me and drink.  He who believes in Me, as the Scripture has said, out of his heart will flow rivers of living water.  John 8:12 says Then Jesus spoke to them again, saying, “I am the light of the world. He who follows Me shall not walk in darkness, but have the light of life.” 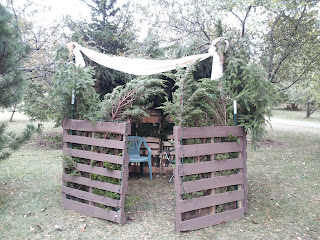 There is Biblical evidence that demonstrates that Yeshua entered the world at the Feast of Sukkot. John 1:14 says, And the Word became flesh and dwelt among us, and we beheld His glory, the glory as of the only begotten of the Father, full of grace and truth.  The Greek word for dwelt, skenoo, literally means to pitch a tent.  Some translations even use the word tabernacled.  The Hebrew word Sukkot included animal shelters... Genesis 33:17 says And Jacob journeyed to Succoth, built himself a house, and made booths for his livestock. Therefore the name of the place is called Succoth.

A study of the time of the conception of John the Baptist reveals he was conceived about Sivan 30, the eleventh week. When Zechariah was ministering in the temple, he received an announcement from God of a coming son. The eighth course of Abijah (Luke 1:5), when Zechariah was ministering, was the week of Sivan 12 to 18. Adding forty weeks for a normal pregnancy reveals that John the Baptist was born on or about Passover (Nisan 14).

We know six months after John’s conception, Mary conceived Jesus (Luke 1:26-33). Therefore, Jesus would have been conceived six months later in the month of Kislev. Kislev 25 is Hanukkah.  Starting at Hanukkah, which begins on Kislev 25 and continues for eight days, and counting through the nine months of Mary’s pregnancy, one arrives at the approximate time of the birth of Jesus at the Festival of Tabernacles (the early fall of the year).

During the Feast of Tabernacles, God required all male Jews to come to Jerusalem. The many pilgrims coming to Jerusalem for the festivals would spill over to the surrounding towns (Bethlehem is about five miles from Jerusalem). Joseph and Mary were unable to find a room at the inn because of the influx of so many pilgrims. They may have been given shelter in a sukkah, which is built during a seven-day period each year accompanying the celebration of the Feast of Tabernacles. Due to the difficulties during travel, it was common for the officials to declare tax time during a temple Feast (Luke 2:1).

Even though the Bible does not specifically say the date of Yeshua's birth, we know it was not during the winter months because the sheep were in the pasture. Round the clock shepherding would especially take place during a pilgrimage festival, where there would be great need of many animals for sacrifices.

Posted by Gratefully Grafted In at 1:56 PM

Email ThisBlogThis!Share to TwitterShare to FacebookShare to Pinterest
Labels: Taberncles