That time of year again...

The frenzy.  The shopping.  The boycotting of stores who refuse to say "Merry Christmas."  The rushing around, preparing for and attending all sorts of parties.  The stress of buying just the right gift for Aunt Matilda.  The extra rehearsals for the Christmas pageant at church.  Pausing from the hubbub to remind ourselves for "the reason for the season."  The overindulgence.  The signs in the yard that say "Keep Christ in Christmas."  The ridiculous overspending.

I just can't do it anymore.

Our family has been on a journey "out of Christmas" for the past few years.  It began when I decided to stop sending out my annual mass-mailing of Christmas cards to pretty much everyone I had ever met.  (I initially changed the mass-mailing to Easter instead, but that eventually had to go, too).

The journey continued as I began to study the Jewish roots of my faith.  My studying included looking at church history.  I learned how ancient Rome under Constantine took everything Jewish away from the faith, and instead tried to "Christianize" the pagan festivals that were celebrated by the Romans.  Saturnalia, the celebration of the death and resurrection of the sun god, became Christmas.  Easter became.... well, Easter.  (They didn't even bother to change the name of that one because Passover was Jewish, so they kept the name of their fertility goddess.)  Even their priests were changed into "Christian" priests without really having to change much.  Instead of worshipping various gods, the people were given various "patron saints" to pray to.

Scripture warns us in numerous places not to mix pagan customs with the worship of the Lord.  Here is one of them that really stood out to me when I read it; Jeremiah 10:2-4:

Thus says the LORD:
“ Do not learn the way of the Gentiles;
Do not be dismayed at the signs of heaven,
For the Gentiles are dismayed at them.
For the customs of the peoples are futile;
For one cuts a tree from the forest,
The work of the hands of the workman, with the ax.
They decorate it with silver and gold;
They fasten it with nails and hammers
So that it will not topple.

If I'm not mistaken, that sure sounds like our modern-day Christmas tree!  You can see scripturally that the custom of cutting down a tree and decorating it originated way before Yeshua was born, and that it was a completely pagan custom.

The more I learned about the pagan-rooted holidays, the less joy I felt in trying to celebrate them.  And the more I learn about the Biblical Feasts and how they all point to Yeshua the Messiah, the more joyful they have become!

You're probably thinking, "Oh, your poor children!  How can you rob them of Christmas?"  My poor children are learning the Biblical Feasts, too.  And my poor children are not being trained in the frenzy of materialism of Black Friday, the Shopping Season, and Christmas morning.  During Hanukkah, we light the menorah, make latkes in the oil that represents the Holy Spirit, and celebrate the fact that Yeshua is the Light of the World. 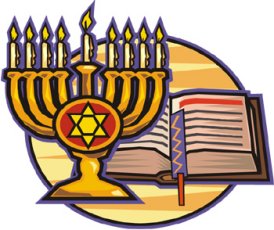 I have been asked, "Well, is it wrong for us to celebrate the birth of Jesus on December 25?"   I'll give you my thoughts on that in my next post.


Posted by Gratefully Grafted In at 7:20 AM