I've been taking a little good-natured heat for my stance on Christmas.  I love my friends dearly, which is why I shared the scripture from Jeremiah 10 about cutting down trees from the woods and decorating them like the pagans do.  But in the last twenty four hours I've heard expressed to me both "legalism" and "well, it's just the Old Testament" (with a shrug).

Perhaps, in hindsight, I shouldn't have started with Jeremiah 10.  I had been studying paganism in the church for a long time before I stumbled onto that verse.  "Christmas" isn't in scripture.  It was begun in the fourth century when Constantine "converted" to Christianity, outlawed the celebration of any biblical Feasts or Sabbaths, persecuted the Jews, and made all the pagan Roman festivals into "Christian" ones.  Friends, Jesus was Jewish, not Roman.  Whenever I hear "Keep Christ in Christmas," I want to shout out that He wasn't there in the first place - it was Saturnalia; the celebration of the death and resurrection of the sun god!  But of course, that would be rude, so I keep my mouth shut.  (Well, ok, not always - but sometimes I can't HELP it!).

Both pagans and Jewish people chuckle at Christians around Christmastime.  Many of them know about the pagan roots to the holiday, even if believers don't.  The God of the Bible wants to be worshipped in spirit and in truth.  God has a way that He wants to be worshipped.  He calls the mixing in of pagan things "harlotry."  Remember the golden calf?  The high places?  The cakes baked for the queen of heaven?

Let me go back to that "it's just the Old Testament" comment for a moment.  There's this idea in Christianity that it's outdated and no longer relevant.  Not true.  Look at Acts 17:11-12 - These [Bereans] were more fair-minded than those in Thessalonica, in that they received the word with all readiness, and searched the Scriptures daily to find out whether these things were so. Therefore many of them believed, and also not a few of the Greeks, prominent women as well as men.

These guys, both Jewish and gentile, weren't searching through the New Testament scriptures - those hadn't been written yet.  They poured through the Tanakh (aka "Old Testament"), which points to the Messiah Yeshua in every single book.  Yeshua fulfilled the Mosaic covenant (the old covenant law) when he gave us the new covenant through His blood (see Jeremiah 31:31-33), but there's a whole lot more to the Tanakh than the Mosaic covenant.  We are grafted into the kingdom of God - the God of Abraham, Isaac, and Jacob (Israel) - and we'd best be studying ALL the scriptures for ourselves.

Here's the thing.  Jeremiah 10 says the customs of the gentiles are futile - they cut trees and decorate them.  This statement was never abrogated (overruled, reversed) anywhere in scripture.  Well, I'm going with scripture, and not the traditions of men. 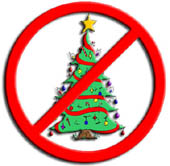 By the way, only two more days till Hanukkah!  Woohoo!  Now there's a biblical holiday!  (John 10)﻿
Posted by Gratefully Grafted In at 5:42 PM