The Armor of God

I have had this subject floating around in my head for weeks now.  And the Lord keeps putting things in front of me to remind me to write it down!  Just this week, the kids and I were reading about the ancient Greeks and Cretans and how they were workers of iron to make weapons that were better than bronze.  And last Saturday, I heard a keynote speaker on the Armor of God.  Ok, ok, I get it, Lord.  So here goes...

Most believers are quite familiar with Ephesians 6:14-17, which speaks of the Armor of God.  For reminder's sake, here it is:

Stand therefore, having girded your waist with truth, having put on the breastplate of righteousness, and having shod your feet with the preparation of the gospel of peace; above all, taking the shield of faith with which you will be able to quench all the fiery darts of the wicked one.  And take the helmet of salvation, and the sword of the Spirit, which is the word of God.

As I was studying the words, I realized that the first three pieces of armor are already in place. They were provided to us at the moment of redemption, when we are born again in Messiah. We are already armed with the truth (by which we realized Yeshua IS our savior), the breastplate of righteousness (Yeshua made us righteous), and our feet have been prepared with the good news of peace in Messiah. At the moment our justification, we were armed with good armor!

The Bible instructs us then, having been armed thus far, to take up the remaining pieces. We must arm ourselves with that shield of faith day by day, because those fiery darts are constantly aimed at us. The helmet of salvation is a picture of renewing our mind and taking every thought captive to Yeshua (Romans 2:12, 2 Corinthinans 10:5). And finally, the sword - the Word of God - is our spiritual bread that sustains and arms us. These three pieces are available to us as we are sanctified (a lifelong process), but we must actively take them up. We need them as we work out our salvation (Philippians 2:12).

Notice that there is no armor for our backs. I believe it is because God does not want us to retreat from the battle, and also because He has got our back!

I find it interesting that spiritual armor was not just a clever idea made up by Paul in Ephesians. He was a Torah scholar, and was well familiar with the concept. Here is a passage from Isaiah 59, which is clearly foreshadowing the Messiah:

And was clad with zeal as a cloak.

Isaiah clearly shows that our Intercessor - provided by the LORD'S own arm, was armed and clothed for the job that He was sent to do. I love that Isaiah included a piece of armor for both justification and sanctification in this passage, showing that salvation is not simply a one time deal, but an ongoing process that began the moment we were justified. Our salvation will be complete at the resurrection when we receive our new imperishable bodies.

Another piece of the Ephesians armor can be found in Isaiah 52:7: 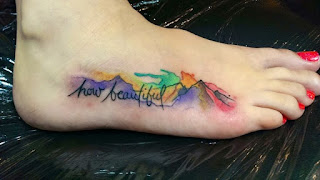 In closing, let's go back to the beginning of Ephesians 6 and be reminded of just Who is in charge and who we are battling:

Finally, my brethren, be strong in the Lord and in the power of His might. Put on the whole armor of God, that you may be able to stand against the wiles of the devil. For we do not wrestle against flesh and blood, but against principalities, against powers, against the rulers of the darkness of this age,against spiritual hosts of wickedness in the heavenly places.
Posted by Gratefully Grafted In at 8:08 AM