We are in the midst of a tetrad of blood moons - four total lunar eclipses that coincide with four Biblical Holy Days in a row.  Passover 2014, Sukkot 2014, Passover 2015, and Sukkot 2015.  For more on the odds of this happening, see the highlighted blue print at end of this post.  For now, let's just say the odds are beyond tiny.

The Word of God says right in Genesis 1:14 that God put the sun, moon, and stars in the sky for several reasons.  They are for signs, seasons, days, years, and to provide a night light for us.

Days, years, and night lights are pretty straightforward.  But what about the others?

The Hebrew word for sign is ot, which means a sign, a signal, a remembrance, a warning, an omen.

The Hebrew word for season is mo'ed, which means appointed time, or appointed meeting.

The Bible speaks of the moon turning to blood (total lunar eclipse) several times.  Joel 2:31 tells us The sun shall be turned into darkness, And the moon into blood, before the coming of the great and awesome day of the Lord.  This passage is quoted in Acts 2:20.  The theme of signs in the heavens before the Lord's return continues in Revelation 6:12, Matthew 24:29, Mark 13:24, and Luke 21:25. 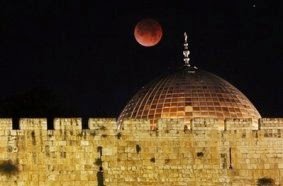 I had the privilege of being in Israel last summer for Shavuot (Pentecost for you Greek speakers), which was seven weeks after the first blood moon of the tetrad.  Five days after my return home, three Israeli teens were kidnapped and murdered near the ancient Biblical town of Hebron.

This tragic event led directly to the Gaza War - Operation Protective Edge - during which the IDF discovered many terror tunnels leading into Israel.  It was also discovered that Hamas intended to use these tunnels for a massive terror attack on the first fall Biblical feast of Yom Teruah (aka Rosh Hashanah). The soldiers found IDF uniforms, ropes, syringes, and other items that were to be used to take Israeli hostages.  The IDF destroyed the tunnels, the war ended after 50 days, and the planned terrorist attack of Rosh Hashanah was averted.

In the meantime, the evil entity of ISIS arose, seemingly of of nowhere.  I won't elaborate on their "activities," because if you don't know, you are quite possibly living under a rock. 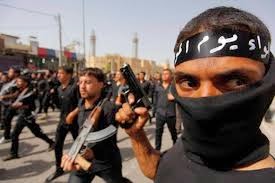 The second of the four blood moons just happened a couple weeks ago, as Sukkot was beginning.  Since then, the Silent Intifada (uprising) by Arabs has begun.  Just yesterday, a terrorist who was previously imprisoned for his terrorist activities, rammed his car into people at a light rail stop in Jerusalem, killing three-month-old Chaya Brown.

As tragic as the murders of this precious girl and the three teens near Hebron are, occurrences like these serve to unite the people of Israel like nothing else.  The three teens did not die in vain; because of their murders, a massive terror attack was averted.  It remains to be seen how this little girl's tragedy will change the course of history.

So what comes next?

Scripture does not tell us exactly what to expect with each blood moon.  We are to be ready and watchful, knowing that the Messiah will be coming soon.

I repeat, something's up, so keep looking up!
Posted by Gratefully Grafted In at 5:33 PM