This post ended up being a continuation of my last...  in case you haven't read it, you can go here:

Geology in Scripture - Rocks and Water

So, now I am going to step on a few theological toes here.

The other night, we were singing a song about the blood of Jesus.  Of course, in the context of the redemption of man, it an excellent theme.

However, I have noticed that in singing and prayers, we often call on the blood of Yeshua to constantly cleanse us.  We pray the blood of Yeshua over any number of conflicts in our life.  But is this what we should do?
My last post dealt with the punishment of Moses when he struck the rock the second time, instead of simply speaking to it.  The meaning is that the Rock (Yeshua) only had to be struck once.  In other words, His blood was shed once for all to atone for our sin.  Once we have applied it to our lives, we are justified.  It’s a done deal.  No more blood needed.
When the Roman centurion plunged the spear into Yeshua, who was already dead, out flowed both blood and water.  The blood represents our justification, which happens as a one-time event:  when we turn to Him in faith.  The water, however, represents our sanctification… the process of our lives being cleaned up as we live for Him, empowered by the Holy Spirit.
This same pattern can be seen in the the tabernacle and also the feasts (both of which are rarely mentioned in the church).  Each is made up of seven parts (seven represents completeness), and it is amazing how they line up with each other!
The first element of the tabernacle is the altar; a picture of redemption, which is also called justification.  The first feast, Passover, is also a picture of that redemption/justification with the sacrifice of the Passover Lamb.  Justification is a one-time deal... our redemptive price is paid in full. 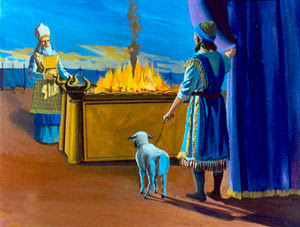 The second element of the tabernacle is the laver; a basin of water that represents the cleaning up our lives.  After the sacrifice of the lamb on the altar, the priests would need to clean up.  Sacrifice is messy!  Likewise, we came to the altar flawed and sinful, and we were accepted as we were.  But in the same way, there is a lot of cleanup to do! 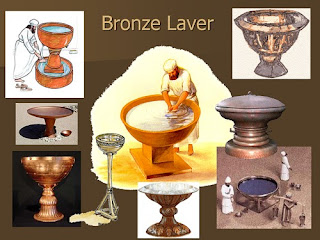 God loves us too much to leave us messy at the altar; thus the laver - which gives us a picture of our sanctification.  As a parallel, the second feast (of the seven )is Unleavened Bread.  Leaven in scripture symbolizes sin, and the seven day feast of Unleavened Bread is another picture of our sanctification, which takes place over the course of the rest of our lives (the seven days demonstrating that completeness).
I have often heard “the blood of Jesus” prayed over a situation with a believer that really calls for the cleansing, living water instead.  The blood was already shed, and there is no need to strike that Rock again.  Yeshua was raised from the dead, no longer mortal flesh and blood (1 Corinthians 15:50 says that flesh and blood cannot inherit the kingdom of God). The Living Water flows constantly, purifying and cleansing us as we walk out our sanctification, serving our risen King! 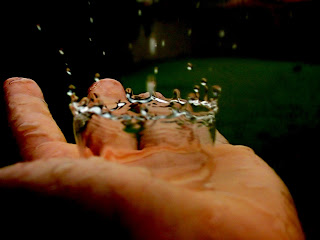 Posted by Gratefully Grafted In at 10:03 AM