Hospitality and the Kingdom of God

I have been studying Matthew 10, when Yeshua sent His twelve disciples out.  I love how the new covenant dovetails so beautifully with the old!

But before I get into discussing hospitality, I just want to point out that in verse 6, Yeshua says "But go rather to the lost sheep of the house of Israel."  This does not mean that He loves the Gentiles any less, but is putting things in their proper, Biblical order of "to the Jew first."

The apostles were to take no money or luggage, and were to enjoy the hospitality of righteous ones who were willing to give it.  In turn, they would bring peace upon the household.  Conversely, they were to "shake the dust off their feet" while departing from people or cities who did not receive them.  In Jewish custom, the dust shaking was actually a warning of the judgment of God.  The hospitable ones would receive peace, and the non-hospitible ones would not.

Hospitality is a very important theme in scripture.  We see this very scenario played out in Genesis 18.  Three ushpizin (Hebrew for guests) came to visit Abraham.  Abraham went over the top in showing hospitality to these visitors.  And what happened?  Did peace come to this house?  Yes, indeed!  Genesis 18:10 tells us that Abraham and Sarah are promised a son within the year. 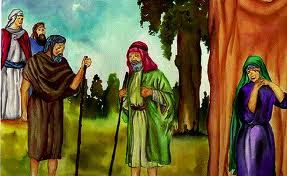 Two of the ushpizin left and headed to Sodom.  The third - which is probably a theophany (pre-incarnate earthly visitation) of the Lord - stayed behind with Abraham while Abraham pleaded for the righteous in the city of Sodom (of which there ended up being less than ten).

In Genesis chapter 19, the two angels arrived in Sodom.  Other than Lot, the people of the city did NOT show the visitors good hospitality.  You can go read the details yourself if you wish.  You know what happened.  Sodom and the nearby city of Gomorrah were destroyed. 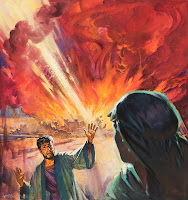 Matthew 10:15 links back to the events of Genesis 18-19:  Assuredly, I say to you, it will be more tolerable for the land of Sodom and Gomorrah in the day of judgment than for that city!

Posted by Gratefully Grafted In at 2:00 PM