A few months ago, I finished reading a lengthy commentary on the book of Genesis.  At one point, the author disparaged the idea that Yosef (Joseph) was a prophetic picture of Yeshua (Jesus).  I could almost hear his eyes rolling as he dismissed the idea, saying that SOME commentaries tend to go overboard in trying to make that connection.

Let’s see if he is right.


Both were the beloved sons of their Fathers.


Both were given special, colorful robes.


Both were sent by their Fathers to their brethren.


Both were 30 years of age when they began their ministries (the same age as a priest).


Both were shepherds of their Fathers’ sheep.


Both were taken to .


Both washed the feet of their brethren.


Both brought bread to people.


Both were rejected by their brethren.
Both were subject to a plot to kill them.
Both were betrayed for silver.


Both were falsely accused.


Both were stripped of their robes.


Both had blood on their robes.


Both suffered although they were righteous.


Both were bound in chains.


Both forgave those who wronged them.


Both were in the ground for three days.


Both had stories made up about their deaths.


Both brought salvation to their nation .


Both were elevated to the position of second in command.


The wrongs that men did to them, God used for good.


Both were placed with two prisoners, one who was saved and the other who was not.


Both saved the world for 2(000) years after being rejected by their brethren.


Both were exalted after suffering.


Both had brethren who vowed never to bow down to them. (Most Jewish people today want nothing to do with Yeshua)


*Both appear as a foreigner so that their brethren would not recognize them.


*Both reveal themselves to their brothers privately.


*Both have brothers who weep in sorrow and fear as they recognize them.
The last three similarities, marked by asterisks, are still awaiting final fulfillment by Yeshua.
* First, Yosef appeared as an unrecognizable Egyptian to his brothers.  In the same way, Yeshua has been removed from His Jewish context and presented over the centuries to the Jewish people as a foreign, pagan Gentile god.  I can almost see it now when they finally recognize Him:  "Is it really YOU?? Our Messiah?" 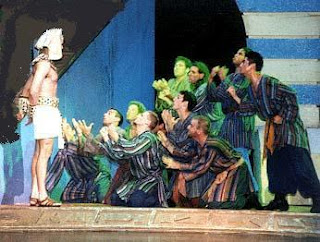 * Secondly, Yosef had everyone leave the room when it came time to reveal himself.  I believe that this is the moment that the believers are gathered from the Earth (aka "the rapture"):  just before the Lord returns in Revelation 6 and 7 and seals the tribes of Israel before God pours His wrath on the rest of the Earth.
* Thirdly, this will be the fulfillment of Zechariah 12:10; when they look with sorrow and fear upon Him whom they have pierced.
Yes, I guess I can see how the commentator would be hestiant to see the similarities between Yosef and Yeshua.  NOT!  How much more obvious can it be, anyway?  The Jewish sages taught that there were two pictures of the Messiah in the holy scriptures:  Messiah ben (son of) Yosef  - the Suffering Servant - and Messiah ben David - the Conquering King.  Some believed that there were two messiahs, since the messianic pictures were so different.  And some thought that there would be one Messiah that comes TWICE.
Imagine that!
Posted by Gratefully Grafted In at 7:00 PM