The Scriptures are a gold mine.  If you keep searching, you find many nuggets under the surface.

Here is a beautiful example.  Most people agree that Psalm 22 is a depiction of the Messiah to come.  But look at verse 6:

But I am a worm, and no man;
A reproach of men, and despised by the people.

Is Yeshua really being compared to a worm?  Worms in scripture generally have a bad connotation.  But Yehsua was sinless... there has to be more to the story here.

(You can do a word study on worms in the Bible, and you will notice a definite play on words in connection with worms.  While men in their depraved sin nature are symbolized as "maggots" in the scriptures (Hebrew rimmah), Yeshua is symbolized as the rare Crimson grub (tola'ath).  Job 25:6 actually uses both words:  How much less man, who is a maggot, And a son of man, who is a worm?”) 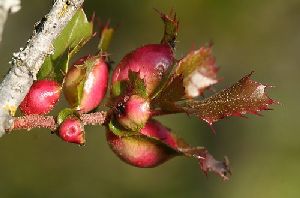 The word "worm" referred to is unique in Scripture.  The Hebrew word tola'ath is a particular female worm, which is called the "crimson worm."   The Crimson worm is common to the region of old Israel and was used in the dyeing of garments to scarlet.

Only when you study the attributes of this worm can you really understand what the verse is saying.  See if any of this has a ring of familiarity to you...

When the Crimson worm is prepared to reproduce offspring (and she does so only once in her life) she rigidly attaches herself to an oak tree in such a way that she can never be removed without tearing her body completely apart.  The crimson worm willingly climbs on the tree all by itself - nobody forces it to get on the tree. The worm knows when it climbs on the tree that it will not come back down alive. It is going to the tree to birth a family and to do that it must die.

The worm will then lay its eggs and shelter them under her body.  During the birthing process, she secretes a crimson fluid or gel. The scarlet fluid covers her entire body and all the eggs she lays. It also leaves a stain on the tree, which will never fade away with the passing of time!

After dying to birth the family, something amazing takes place. For a period of three days the worm can be scraped from the tree and the crimson gel can be used to make a dye. That dye was the same which was used in the tabernacle and in the garments of the High Priest.

On the morning of the fourth day, the worm has pulled the head and tail together and is now in the shape of a heart on the tree but it is no longer crimson. It is now a wax, which is white as snow! They can still harvest the wax and use it to make shellac, a preservative of wood.

The crimson worm is also very fragrant when it is crushed.  No other life in history has sweetened the pathway of humanity like the crimson worm who was crushed for our sin - Yeshua!

The crushed worm is also used to make medicine. Praise be to the One Who heals our diseases!

Bless the Lord, O my soul,
And forget not all His benefits:
Who forgives all your iniquities,
Who heals all your diseases
Psalm 103:2-3

Posted by Gratefully Grafted In at 7:48 AM

Email ThisBlogThis!Share to TwitterShare to FacebookShare to Pinterest
Labels: Shadow