We interrupt my posts on the letters to the seven churches to bring you this fantastic Biblical holiday, which begins tonight, September 28, at sundown.  I really wanted to have the seven churches posts done by now, but there have been so many good things to learn and it has been a slow and studious road.

So anyway, Happy Yom Teruah everyone!  Yom Teruah means the Day of Trumpets in scripture.  It is the fifth of the seven Feasts of the Lord.

Leviticus 23:23-25 introduces us to this feast (mo'ed in Hebrew, which actually means "appointed time.")
Then the LORD spoke to Moses, saying,  “Speak to the children of Israel, saying: ‘In the seventh month, on the first day of the month, you shall have a sabbath-rest, a memorial of blowing of trumpets, a holy convocation.  You shall do no customary work on it; and you shall offer an offering made by fire to the LORD.

Numbers 29:1 repeats the description of the feast:
And in the seventh month, on the first day of the month, you shall have a holy convocation. You shall do no customary work. For you it is a day of blowing the trumpets. 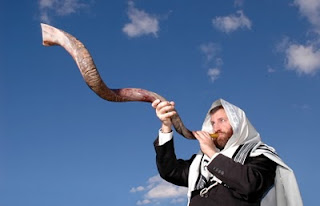 There isn't much more in scripture regarding this feast.  But the trumpet!  It is blasted throughout scripture for many purposes. It was a call to gather, and it was a call to repent.  The Hebrew word (transliterated into English) is shofar.  It was and is made from the horn of an animal.  I have one that is long and spiraled (like the one in the picture above), and it was a gift from some dear friends.

So, if Yeshua fulfilled the first four feasts during His first coming  (Passover, Unleavened Bread, Firstfruits, and Shavuot were fulfilled by His death, burial, resurrection, and sending of the Holy Spirit), it stands to reason that He will someday fulfill the Fall Feasts at His return.  God sent us these beautiful prophetic pictures of what is to come, so that we can study them, learn from them, and CELEBRATE them!

Joel 2:1 says, Blow the trumpet in Zion,
And sound an alarm in My holy mountain!
Let all the inhabitants of the land tremble;
For the day of the LORD is coming,
For it is at hand

Matthew 24:31 says:  And He will send His angels with a great sound of a trumpet, and they will gather together His elect from the four winds, from one end of heaven to the other.

And look at 1 Corinthians 15:51-52:  Behold, I tell you a mystery: We shall not all sleep, but we shall all be changed— in a moment, in the twinkling of an eye, at the last trumpet. For the trumpet will sound, and the dead will be raised incorruptible, and we shall be changed.

And also, 1 Thessalonians 4:6 says:  For the Lord Himself will descend from heaven with a shout, with the voice of an archangel, and with the trumpet of God. And the dead in Christ will rise first.

Are you getting a picture of the Lord's return, and His gathering of His believers?  Yom Teruah is the only Biblical Feast that falls on the first day of the month - the new moon.  The priests had to see the thin crescent of moon and declare the start of the new month.  For no man knows the day or the hour... until it is seen and declared!

Today, the holiday is called Rosh Hashanah among the Jewish people, which means "Head of the Year."  The term is not found in scripture but comes from rabbinic Judaism, which is the Judaism that was developed and has existed since the destruction of the temple in 70 AD - in accordance with the Mishnah and the Talmud.   According to rabbinic tradition, the creation of the world was completed on 1 Tishrei.  This year's Rosh Hashanah welcomes the year 5772.

The next ten days are called the Days of Awe.  Jewish people reflect on the holidays and ask forgiveness from anyone they may have wronged.  Rosh Hashanah is a joyous holiday.  Symbolic foods are eaten that signify sweetness; for example, apples and honey.  L'Shanah Tovah Tikatevu!  (This is Hebrew transliterated into English and means "May you be inscribed (in the Book of Life) for a good year.")

Posted by Gratefully Grafted In at 1:25 PM