We now come to chapter 8 and the end of the flood.  Even though the rain only lasted 40 days and nights, it took quite awhile for the waters to recede.

We then learn:
Then the ark rested in the seventh month, the seventeenth day of the month, on the mountains of Ararat.

I want to address the biblical calendar for a moment.  I have learned that the original Genesis calendar was flipped when the nation of Israel was given the Sinai Covenant.  Prior to Sinai, the first month would have been in the fall (which is why the Jews celebrate the new year on Rosh Hashanah in September).  At Sinai, God gave them a new calendar, and the first month became the time of their Egyptian escape.

So what would be the significance, then, of the ark resting on the seventeenth day of the seventh month?  If you fast forward and look at the Sinai calendar, this becomes the very day of the Messiah's resurrection of the dead!  The Feast of Firstfruits!  This prophetic occurrence represents a new beginning for the world. 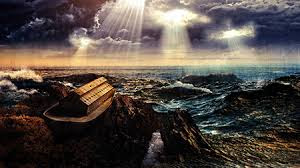 After 40 days of being at rest on Mount Ararat (wherever that is), Noah sent out a raven.   It is interesting to note that the first thing that exited the ark was something unclean, and it did not come back. The raven never returned to the ark, but probably was able to gorge itself on floating, rotting dead things.

At the same time, Noah released a dove.  The dove found no resting place among the carnage but returned to the ark.

Seven days later, the dove was released again. She came back seven days later with an olive branch in her beak, letting Noah know that vegetation was returning to the earth.  And in seven more days, she was sent out again and did not return.

The symbolism of the raven and the dove is clear.  The raven is a representation of evil and uncleanness.  The dove represents peace, as does the olive branch she brought back.  The dove also represents the Holy Spirit.  We see a snapshot of the gospel going forth over the earth. 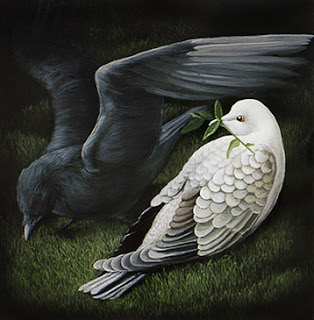 Following the birdie exodus, we see the following timeframe in Genesis 8:13-14:

Did you catch that?  The ark had rested on the 17th day of the seventh month, after 150 days.  But now we are at the first month of the first day... that is nearly a full year after the family of Noah had entered the ark.  The next time I have cabin fever in the winter, I am going to stop and remember those 8 people cooped up on the ark!

The LORD then told Noah to get out of the boat, along with every living thing that was there with him.

Stepping out of the ark after a year on board, everything was different. A new beginning!

The very first thing Noah did was to worship the LORD.  He made a sacrifice to the LORD with some of the extra clean birds and animals he had brought along on the ark.

This is what we see from the LORD in response to Noah's act of worship.

Then the LORD said in His heart, “I will never again curse the ground for man’s sake, although the imagination of man’s heart is evil from his youth; nor will I again destroy every living thing as I have done.
“While the earth remains,
Seedtime and harvest,
Cold and heat,
Winter and summer,
And day and night
Shall not cease.”

(This is my go-to when I hear of people freaking out about global warming and climate change.  We have this beautiful promise from the LORD and can stand on it in faith.  The earth will continue until He decides it is time to regenerate it).

When everything you knew in life is gone, you need a new covenant. And God was about to establish a new covenant with Noah.  My next post will talk about that covenant.   But first, I want to point out the amazing comparisons between the ark and the Messiah. 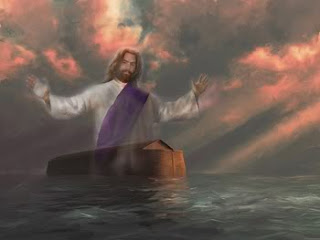 The ark was a picture of Messiah. This is what we can see from the ark example:

Posted by Gratefully Grafted In at 8:33 AM