Ahh, chapter 40.  Be still my heart.  It's SO GOOD!  Chapter 40 begins a fresh and exciting leg of the journey through Isaiah.

May I just camp on this verse for a moment?

Comfort:  In Hebrew, it is nachmu, nachmu.  This is a command.  It means to be sorry, to be moved to pity, to have compassion, to suffer grief.  It is repeated twice for emphasis.
"MY people says YOUR God."  Consider the pronouns.  Who is being spoken to and who is being spoken of?


Verse 2 tells us.  Speak comfort to  and cry out to her, that her warfare is ended, that her iniquity is pardoned, for she has received from the LORD’S hand double for all her sins.

This is a command to those of us who are believers, regarding God’s chosen people.  The church has persecuted Jews since very early on, ever since the early church fathers began to teach Replacement Theology in the second century.  We have much to be sorry for, much to repent for, much compassion to show them.  Bridges must be rebuilt, and they ARE being rebuilt! 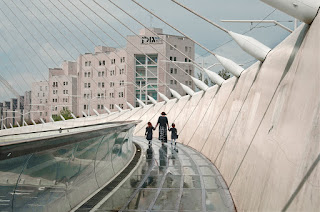 If we look more in depth at verse 2, it could be stated like this:  Speak comfort, or tenderly (literally – to the heart of)  to and cry out (proclaim) to her, that her warfare (tsava – same word used of IDF; tsavaot means armies – as in LORD of Sabaoth) is ended (fulfilled), that her iniquity is pardoned (accepted, paid off), for she has received from the LORD’S hand double for all her sins.

Double for her sins… is this fair? Did Israel really have to suffer so much?

Luke 12:48 says – For everyone to whom much is given, from him much will be required.  was given the covenants, the Word of God, and the very Messiah Himself.  (See Romans 9:4)

Yes, they have suffered greatly.  But it was the LORD Himself that caused their blindness for the sake of the rest of the world (Romans 11:7-8, which is right from Isaiah 29:10).  Great was their suffering, but great will be the glory in their redemption.  See Romans 11:12, 15.

We are told not to boast against the cut-off natural branches, but the church has done just the opposite through the centuries.  See Romans 11:18.  In fact, just click here to go and read all of Romans 11.  We'll wait for you.

Rise up, church!  The time to comfort is at hand.  Unfortunately, most will not do it.  If you are not excited about what God is doing through , you probably don’t understand it. 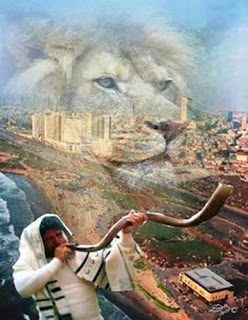 Moving on, in verses 3-4 we see the first of  THREE VOICES in this section.
The voice of one crying in the wilderness:“Prepare the way of the LORD;
Make straight in the desert
A highway for our God.
Every valley shall be exalted
And every mountain and hill brought low;
The crooked places shall be made straight
And the rough places smooth

The ancient custom for traveling kings was to go out before them and even out the terrain, preparing the way for the king. I must pause here and mention that the last time I was in Jerusalem, it was during Donald Trump's visit.  His helicopter landed literally in the parking lot across from where I was staying.  The municipality of Jerusalem actually removed bushes and curbs to level out the lot!  So I guess it isn't just an ancient custom to smooth out the terrain for a visiting dignitary. 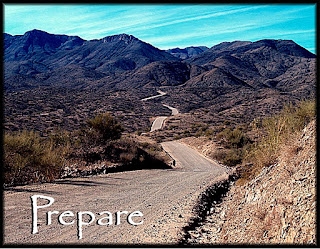 So who went before King Messiah to do this?  Time for some systematic theology!  (aka biblical gymnastics):

And he will prepare the way before Me.
And the Lord, whom you seek,
Will suddenly come to His temple,
Even the Messenger of the covenant,
In whom you delight.
Behold, He is coming,”
Says the LORD of hosts.


And then Malachi 4:5-6...
Behold, I will send you Elijah the prophet
Before the coming of the great and dreadful day of the LORD.
And he will turn
The hearts of the fathers to the children,
And the hearts of the children to their fathers,
Lest I come and strike the earth with a curse.”

And Luke 1:16-17...
And he will turn many of the children of Israel to the Lord their God.  He will also go before Him in the spirit and power of Elijah, ‘to turn the hearts of the fathers to the children,' and the disobedient to the wisdom of the just, to make ready a people prepared for the LORD.”


Matthew 11:14 (speaking of John the Baptist)
And if you are willing to receive it, he is Elijah who is to come.

I need to backup in Matthew 11 for a moment, to verse 12...
And from the days of John the Baptist until now the kingdom of heaven suffers violence, and the violent take it by force.

This is a poor Greek translation of Hebraic thought. And this unfortunate mistranslation has been used to justify violence by the church for centuries (the crusades, the inquisition, etc.)

The context comes back to Isaiah 40:3-4, of one preparing the way.  We can look at Micah 2:12-13 to get more clarity:
I will bring them together like sheep in a pen, like a flock in its pasture; the place will throng with people. One who breaks open the way (peretz) will go up before them; they will break through the gate (peretz) and go out. Their king will pass through before them, the LORD at their head.

The following was written by author Lois Tverberg:
In biblical times, the shepherd would lead the sheep around open land to graze all day. As the sun was going down, he would herd them into a pen made with boulders or into a cave closed with boulders. He himself would sleep in the gate or "be" the gate. In the morning, the sheep would be restless, hungry, bursting with energy and eager to get out to pasture. 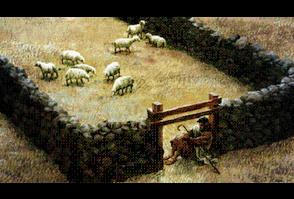 Suddenly, one of the shepherd's helpers would "break open the way" by pushing aside a boulder in the fence. The sheep wouldn't just leave calmly - they would burst out in a stampede, breaking through the other boulders in their way. The shepherd would exit along with them and then they would follow the him out to pasture. 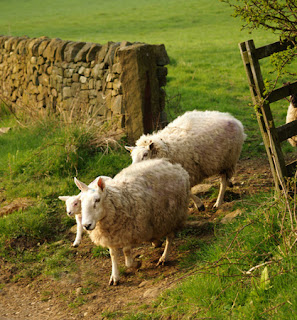 This is a great time for a Hebrew word study:  peretz.  In my Blue Letter Bible app, the definition of the word is this:  to break through or down or over, burst, breach.

In Genesis 38:29, we see the same word used when Tamar named her baby Peretz (or Perez).  He broke through and was born before his brother Zerah, who had been poised to be born first and had a red thread tied to his hand by the midwife to prove it.

John the Baptist was the one who broke the way for the Messiah’s first coming. He was the voice in the wilderness!

However, in Isaiah 40 the prophecy continues. Verse 5 says this:
The glory of the LORD shall be revealed,
And all flesh shall see it together;
For the mouth of the LORD has spoken.”

This is another example of near/far prophecy intertwined into the text, now referring to the Day of the LORD at His return.  The whole world will know it and see Him.
There are a few people who were blessed to see His glory one on one.
Moses, from the cleft of the rock
Isaiah, in his vision in chapter 6
Daniel and Ezekiel in their visions
Peter, James, and John on the Mount of Transfiguration
Saul in his vision on the way to
John in his vision of Revelation.

His glorious return will be seen by the whole earth… as lightning flashes from one end of the heavens to the other. Matthew 24:27 confirms this:
For as the lightning comes from the east and flashes to the west, so also will the coming of the Son of Man be.

This comparison of man to withering foliage is in direct contrast to the glory of the LORD in verse 5. We fade and wither, but the Word of our God stands forever.

This idea that we are like grass and fades away sounds discouraging. BUT FOR 1 Peter 1:22-25...
Since you have purified your souls in obeying the truth through the Spirit in sincere love of the brethren, love one another fervently with a pure heart, having been born again, not of corruptible seed but incorruptible, through the word of God which lives and abides forever, because
“All flesh is as grass,
And all the glory of man as the flower of the grass.
The grass withers,
And its flower falls away,
But the word of the LORD endures forever.” (quoting Isaiah 40)

The context is the gospel and the blood of Messiah which makes the corruptible grass and flower seeds into incorruptible seed!  We have an inheritance in Messiah that can never perish, spoil, or fade. 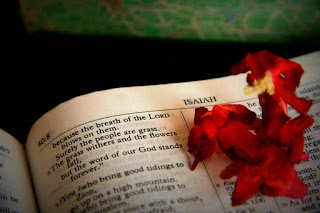 Yes, the word of the LORD endures forever. It is He Who spoke the world into existence.  John 1:1 is a paraphrase of Genesis 1:1...
In the beginning was the Word, and the Word was with God, and the word WAS God.

Good tidings here is the Hebrew equivalent to gospel, which means good news.  What a lovely passage.  It was Zion and Jerusalem who brought the gospel to the world. Now the good news is coming back to them and will culminate in Jerusalem when the Messiah returns.  Soon.


If you would like to start at the beginning of Isaiah, click here.
Posted by Gratefully Grafted In at 8:03 AM