Crossing the Jordan and Passing the Torch

I know... it's a month later and part two of my previous post is just coming out now.  Passover is over, and the whole time I had blog post material floating around in my head!  Additionally, I just finished the book of Deuteronomy this morning and am about to start Joshua. Time to cross the Jordan for a new beginning!

So anyway, this post is a follow-up to my last post on John the Baptist.  If you missed it, you can read it here.

We are going to go back in history and look at the significance of the Jordan River, and the passing of the torch from Moses to Joshua.

Moses had led his people out of Egypt, through the wilderness, and to the edge of the Jordan River.  Because Moses had not carefully followed the Lord's instructions in the wilderness -  striking the rock instead of speaking to it - he was not allowed to enter the Promised Land.  Was God being unfair?

Of course not.  Every act of God has meaning and purpose.  God used the situation for His own illustrative purposes - for us!

Moses, just like so many other figures in the Hebrew scriptures, is a foreshadow of Messiah.  In fact, Deuteronomy 18:15 promises:  The Lord your God will raise up for you a Prophet like me from your midst, from your brethren. Him you shall hear. 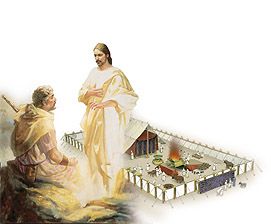 
Moses died and was buried on Mt. Nebo, just across the Jordan River from Jericho.  The torch was passed to Yahoshua (Joshua) son of Nun, and the people prepared to enter the Promised Land. (There are many similarities between Joshua and Yeshua as well... but we will save that for another post).

What time of year did they cross the Jordan?

At the beginning of the first month of the year, Nisan, the Jordan River parted and the people of Israel walked through on dry land, led by the priests.  For a number of days, they camped just east of Jericho.  At this time, the Israelites were circumcised as they prepared for the new beginning.  Passover began on the 14th of Nissan, and the very next day - the first day of Unleavened Bread - the Israelites began to eat of the produce of the land and the manna stopped.

It was also the day they began to march around Jericho.  On the final day of Unleavened Bread, the walls of Jericho toppled by the hand of the Lord, and Israel officially entered the Promised Land.

Crossing the Jordan was very significant.  It is a throwback to the Red Sea.  It is a foreshadow of spiritual deliverance by the Messiah.  This is why our high priest Yeshua was immersed in the Jordan before beginning His ministry.  It is the start of something new!

Peter confirms that Yeshua is the prophet spoken of in Deuteronomy 18 when he says in Acts 3:22, For Moses truly said to the fathers, ‘The Lord your God will raise up for you a Prophet like me from your brethren. Him you shall hear in all things, whatever He says to you.

Yeshua wipes away sin and gives new life to those who will trust in Him. Have you crossed the Jordan yet to meet Him?
Posted by Gratefully Grafted In at 8:31 AM